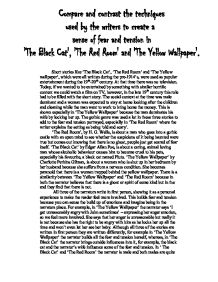 Compare and contrast the techniques used by the writers to create a sense of fear and tension in 'The Black Cat', 'The Red Room', and 'The Yellow Wallpaper'.

Short stories like 'The Black Cat', 'The Red Room' and 'The Yellow wallpaper', which were all written during the pre-1914's, were used as popular entertainment during the 19th-20th century. At that time there was no television. Today, if we wanted to be entertained by something with similar horrific content we could watch a film on TV, however, in the late 19th century this role had to be filled with the short story. The social context at the time was male dominant and a woman was expected to stay at home looking after the children and cleaning while the man went to work to bring home the money. This is shown especially in 'The Yellow Wallpaper' because the man dominates his wife by locking her up. The gothic genre was used a lot in these three stories to add to the fear and tension portrayed, especially in 'The Red Room' where the writer explains the setting as being 'old and scary'. 'The Red Room', by H. G. Wells, is about a man who goes into a gothic castle with an open mind to see whether the suspicions of it being haunted were true but comes out knowing that there is no ghost, people just get scared of fear itself. ...read more.

This means that a lot of emotional tension is built in the story. At the beginning of 'The Black Cat' and 'The Red Room' the respective characters are portrayed in a certain light. Poe portrays his main character as firstly being a very kind, considerate man, 'my tenderness of heart was even so conspicuous as to make me the jest of my companions'. Wells makes his character seem very brave by saying 'it will take a very tangible ghost to frighten me', this makes us, as the reader want to see him more vulnerable. At the end of both stories the characters change, in 'The Black Cat' the narrator becomes 'moody, more irritable and more regardless of the feelings of others'. In 'The Red Room' the narrator becomes scared whilst he is in the room, completely contradicting what he said earlier. The characters in each of the stories help create tension because they openly express a fear of where they are or what they are doing; you do not only experience the tension from the writers description, you also experience it through the way the characters express their emotions. In 'The Black Cat' tension is developed throughout because the series of events that happen are described in enough depth to cause fear and mystery. ...read more.

tension in 'The Yellow Wallpaper' is when the woman is trying to find out who is trapped as it is scary and builds a lot of tension by the language that the writer uses and the way that the writer rushes through what is happening (and sometimes changes the subject to say something totally irrelevant) as if there is no time to stop and take a breath. For example, she says 'to jump out the window would be admirable exercise, but the bars are too strong to even try. Besides I wouldn't do it. Of course not', in that quote although there is sufficient punctuation it seems as though the narrator says it really fast and says it all in one breath in short, sharp sentences. In 'The Black Cat' Poe is purposely ambiguous to build tension. He often says one thing that could mean something else. One example of this is at the beginning of the story, he says 'my wife... made frequent allusion to the ancient popular notion, which regarded black cats as witches in disguise' he then dismisses it by saying 'not that she was ever serious upon his point and I mention the matter at all for no better reason than that it happens, just now to be remembered'. ...read more.