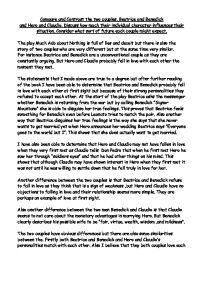 Compare and Contrast the two couples, Beatrice and Benedick and Hero and Claudio. Discuss how much their individual character influences their situation. Consider what sort of future each couple might expect in the play Much Ado about Nothing.

Compare and Contrast the two couples, Beatrice and Benedick and Hero and Claudio. Discuss how much their individual character influences their situation. Consider what sort of future each couple might expect. The play Much Ado about Nothing is full of lies and deceit but there is also the story of two couples who are very different but at the same time very similar. For instance Beatrice and Benedick are a unconventional couple as they are constantly arguing. But Hero and Claudio probably fell in love with each other the moment they met. The statements that I made above are true to a degree but after further reading of the book I have been able to determine that Beatrice and Benedick probably fell in love with each other at first sight but because of their strong personalities they refused to accept each other. ...read more.

Another difference between the two couples is that Beatrice and Benedick refuse to fall in love as they think that is a sign of weakness ,but Hero and Claudio have no objections to falling in love and their relationship seems more simple. They are perhaps an example of love at first sight. Also another difference between the two men Benedick and Claudio is that Claudio seems to not care about the monetary advantages in marrying Hero. But Benedick clearly describes his possible wife to be "fair, virtue, wealth, wisdom ,and mildness". The two couples have obvious differences but there are also some similarities between the. Firstly both Beatrice and Benedick and Hero and Claudio's personalities match with each other. Also I believe that they both couples love each other. Also they have both been manipulated in some way: Hero and Claudio by Don John and Beatrice and Benedick by most of the main characters such as Leonato. ...read more.

Their relationship could also fail if when the couple get older and their looks start to fade the spark in their marriage goes out. I feel that this will not happen with Beatrice and Benedick because their personalities are more light hearted and therefore will take old age less seriously. But I feel that Hero and Claudio are more serious and may find old age depressing. Over all I believe that although Hero and Claudio are a more traditional couple they are less stable and I feel that marriage may change them as they have weaknesses in their personalities. I also think that they are not as strong mentally as Beatrice and Benedick who I believe are more stable and mentally stronger. I also think that they are less likely to get bored with each other. Will Whitehouse 11a ...read more.