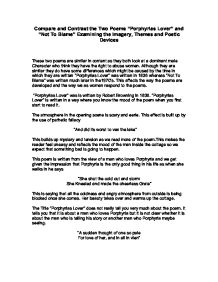 Compare and Contrast the Two Poems

Compare and Contrast the Two Poems "Porphyrias Lover" and "Not To Blame" Examining the Imagery, Themes and Poetic Devices These two poems are similar in content as they both look at a dominant male Character who think they have the right to abuse women. Although they are similar they do have some differences which might be caused by the time in which they are written "Porphyrias Lover" was written in 1836 whereas "Not To Blame" was written much later in the1970's. This affects the way the poems are developed and the way we as women respond to the poems. "Porphyrias Lover" was is written by Robert Browning in 1836. "Porphyrias Lover" is written in a way where you know the mood of the poem when you first start to read it. The atmosphere in the opening scene is scary and eerie. This effect is built up by the use of pathetic fallacy "And did its worst to vex the lake" This builds up mystery and tension as we read more of the poem.This makes the reader feel uneasy and reflects the mood of the man inside the cottage so we expect that something bad is going to happen. ...read more.

"Not to Blame" is told from the eyes of someone who knows about the female getting abused and you get the impression they know them quite well. "The story hit the news From coast to coast" In "Not to Blame" the male character is potrayed as a well known person(he perhaps could be famous) and as you read through the poem you learn that he beat his girlfriend regularly. "With your fist marks on her face" People knew that he beat her but no one did anything to help, maybe because they were scared of him "Your buddies stood by Bet their fortunes And their fame That she was out of line And you were not to blame" I get the impression from this is that the male character has two personalities, one side of him is nice to his fans but once he is out of the lime light then he turns into a whole different person who thinks he can take advantage of the female character. His friends know that he is in the wrong but don't do anything until it is too late. He thinks that she is the one in the wrong, so is willing to hurt her and even take things to far without thinking anything of it. ...read more.

Both Poems use a variety of poetic devices. Irony plays a big part in "Porphyrias Lover" because he kills the one thing that has given him happiness. Pathetic fallacy is also used to set the scene when he says "The sullen Wind was soon awake" This sets the atmosphere to an angry one so we know something will happen. "Not to blame has an irregular rhyme scheme which helps create a sense that the poet is speaking directly to us and the rhyme used helps emphasise the words and make them stand out more. We can see this here when the poem says "I bleed I bleed for your perversity" It draws attention to the lines and makes you think of the message that the writer is trying to get across to the reader. After studying both poems I would say these poems have similarities and differences. The main similarity is the male characters taking advantage of the weaker female character. Although they are similar the main differences are the time periods in which they are written and the that in "Porphyrias Lover" the killing is sudden and no one knew about it. In "Not to Blame" he is a well known person and people knew he was abusing his girlfriend but people were too scared too say anything. By Sinead Morgan 10H ...read more.