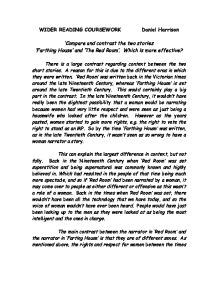 Compare and contrast the two stories 'Farthing House' and 'The Red Room'. Which is more effective?

WIDER READING COURSEWORK Daniel Harrison 'Compare and contrast the two stories 'Farthing House' and 'The Red Room'. Which is more effective? There is a large contrast regarding context between the two short stories. A reason for this is due to the different eras in which they were written. 'Red Room' was written back in the Victorian times around the late Nineteenth Century, whereas 'Farthing House' is set around the late Twentieth Century. This would certainly play a big part in the contrast. In the late Nineteenth Century, it wouldn't have really been the slightest possibility that a woman would be narrating because women had very little respect and were seen as just being a housewife who looked after the children. However as the years pasted, women started to gain more rights, e.g. the right to vote the right to stand as an MP. So by the time 'Farthing House' was written, as in the late Twentieth Century, it wasn't seen as so wrong to have a woman narrator a story. This can explain the largest difference in context, but not fully. ...read more.

In 'Red Room' the man totally doesn't believe in ghosts and isn't frightened at all. Whereas the woman in 'Farthing House' is very sceptical and isn't really sure of what is happening. She is very on edge at most times throughout the story. In 'Red Room' the Ghost that the young man meets is never really known to be a Ghost of the dead, but in Farthing House, near the end we find out that the Ghost is of a young baby who had died at Farthing House'. The two characters tension levels are different throughout both short stories. The man in 'Red Room' is gradually rising in terms of tension. Because one minute he is fine and brave, but can then all of a sudden turn in to a shivering nervous wreck. The man is very confident at most times, feeling that there couldn't possibly be a ghost, but if there is a ghost he wants to meet it, which leaves the reader very confused to what he is thinking. Whereas the woman in 'Farthing House' is very ignorant, but anxious. ...read more.

I also like Farthing House more than Red Room because I think that the story was much more believable and slightly realistic as it isn't to far over the top like in Red Room. In Farthing House, I like the way the narrators tension levels are always changing, as you never know what is going to happen next. I find that the feelings that the narrator of Red Room has are very confusing, as he seems to feel all these different things within a very small space of time. I also find that the end of the story is completely ridiculous and unnecessary. I am talking about the part where the 'Alien Ghost thing' appears to the male narrator and starts helping him, as they seem to have hurt him. It is totally weird, not scary and quite complicated to understand. I much prefer Farthing House as it is a interesting, easy and more recently set story. It isn't as scary as what I would interpret ghost stories to be, but it is more of a ghost story than Red Room. Therefore as I conclude, I can say that Farthing House is much more effective as its story as a whole is much more 'Ghost Story' like as I have previously mentioned. ...read more.