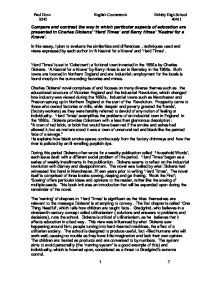 Compare and contrast the way in which particular aspects of education are presented in Charles Dickens' 'Hard Times' and Barry Hines' 'Kestrel for a Knave'.

Compare and contrast the way in which particular aspects of education are presented in Charles Dickens' 'Hard Times' and Barry Hines' 'Kestrel for a Knave'. In this essay, I plan to evaluate the similarities and differences, techniques used and views expressed by each author in 'A Kestrel for a Knave' and 'Hard Times'. 'Hard Times' is set in 'Coketown'; a fictional town invented in the 1850s by Charles Dickens. 'A Kestrel for a Knave' by Barry Hines is set in Barnsley in the 1960s. Both towns are located in Northern England and are industrial; employment for the locals is found mostly in the surrounding factories and mines. Charles Dickens' novel comprises of and focuses on many diverse themes such as the educational structure of Victorian England and the Industrial Revolution, which changed how industry was viewed during the 1850s. Industrial towns such as Manchester and Preston sprung up in Northern England at the start of the Revolution. Prosperity came to those who owned factories or mills, while despair and poverty greeted the 'hands', (factory workers) as they were harshly referred to devoid of any notion of feeling or individuality. 'Hard Times' exemplifies the problems of an industrial town in England in the 1850s. Dickens provides Coketown with a less than glamorous description: "A town of red brick, or brick that would have been red if the smoke and ashes had allowed it; but as matters stood it was a town of unnatural red and black like the painted face of a savage." He explains how black smoke spews continuously from the factory chimneys and how the river is polluted by an ill-smelling purplish dye. During this period Dickens often wrote for a weekly publication called 'Household Words', each issue dealt with a different social problem of the period. 'Hard Times' began as a series of weekly installments in the publication. Dickens seems to reflect on the industrial revolution with dismay and disappointment. ...read more.

Mr. Farthing has gained some respect from the class of boys from his kind personality. Although the lesson has the same content as the lesson in Hard Times, it becomes obvious that Farthing's teaching is different. He manages to involve Billy in the lesson, which is an achievement as Billy is normally shy, lacking motivation. Farthing teaches in a more relaxed fashion, allowing the lesson to flow whilst also welcoming input from the boys. He encourages Billy to participate and makes him feel positively unique as he has something interesting to share with the class. Billy speaks about Kes, who he has raised and trained, and Farthing seems genuinely interested "Jesses, how do you spell that?" He writes words on the board, involving the whole class while discussing one person's unusual talent. Billy becomes the teacher for a while as Farthing does not control as Gradgrind does. The lesson becomes full of individuality as Billy shares his unusual hobby and his confidence grows. This would never have happened in a lesson taught by Gradgrind, he would never encourage a pupil to take over his position and would think a pastime like Billy's ridiculous. The way in which Farthing nurtures Billy's thoughts reflects the way in which Billy has nurtured Kes and the time and devotion that Billy has shown the bird is matched, although on a smaller scale, by the way Farthing waits for Billy to reveal his thoughts and questions him gently. However, few teachers manage children as Farthing does therefore few children are encouraged and nurtured on a one to one basis, most are merely generalised: Billy and some fellow students stand in Mr. Gryce's office, where a poor messenger gets caught up with the group and is forced to temporarily keep hold of their cigarettes. Mr. Gryce finds the cigarettes, accuses the small boy of being "a regular cigarette factory" and calls him "deceitful". ...read more.

The children's lives are followed in the two books, and are portrayed as victims of their individual systems. The consequences of this are shown both to be negative; in A Kestrel for a Knave young Billy Casper's life is an awful one, and in Hard Times when they reach adulthood they are unable to function properly as adults. Therefore, both systems can be seen as failures. Gradgrind's system appears to dehumanise the pupils and individualism is not encouraged. A pupil who is seen to be a success of Gradgrind's school would have been brainwashed, completely empty of personality but full of information in the form of facts that do not properly prepare the children for the life that they are to lead. I believe that Mr. Gryce's method is the system that has prepared the children best for the life they are to lead, as they are more able to cope with the problems that they will encounter. As seen in Hard Times, Gradgrind's class simply can't cope with emotional pressures and so collapse under the strain as Tom did when he chose to steal from his father. Billy, Sissy and most children from his background began life through no fault of their own with a huge handicap. The children have little chance of improving their situation and are therefore all destined to lead relatively uncomfortable lives. Barry Hines and Charles Dickens attempt to expose this social deprivation at many stages in their books. From this we learn that Hines and Dickens have a strong bias towards Billy, Sissy and all similar children in general. Perhaps each author wishes to blame the children's futile existence on the wealthier citizens - the Upper Class. Whether or not the authors intended to, both Hard Times and A Kestrel For A Knave gave credence to what the adolescence of England was being taught at that time. Paul Dunn English Coursework Helsby High School 9242 40411 1 7 ...read more.