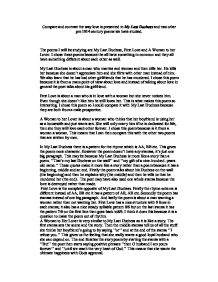 Compare and contrast the way love is presented in My Last Duchess and two other pre 1914 century poems we have studied.

Compare and contrast the way love is presented in My Last Duchess and two other pre 1914 century poems we have studied. The poems I will be studying are My Last Duchess, First Love and A Woman to her Lover. I chose these poems because the all have something in common and they all have something different about each other as well. My Last Duchess is about a man who marries and woman and then kills her. He kills her because she doesn't appreciate him and she flirts with other man instead of him. We also learn that he has had other girlfriends that he has murdered. I chose this poem because it is from a mans point of view about love and instead of talking about love in general the poet talks about his girlfriend. First Love is about a man who is in love with a woman but she never notices him. Even though she doesn't like him he still loves her. ...read more.

First Love has a nice structure with 8 lines in each stanza; it also has a nice steady syllable pattern 8/6 but on the last stanza it has the pattern 7/6 on the first line then goes back to8/6. I think it does this because it is a question to make the poem out of rhythm. A Woman to Her Lover is very similar to My Last Duchess as it is like a story. The first stanza sets the scene and the story. Then the middle stanzas tell us of all the stuff she thinks her boyfriend's going to by saying ''or'' and at the end of the stanza ''I refuse you.'' This gives us the feeling that she really wants a good loyal husband who she can depend on. The end finishes the story poem by starting the stanza with a ''But'' the poet then starts saying positive phrases ''then O husband I am yours forever'' and ''until we reach the very heart of God.'' ...read more.

This may be because rather than comparing things the poet says it as it is. There also isn't any imagery in A Woman to Her Lover but there is a list of three. ''Oh shame, and pity and abasement,'' Meaning that she is really upset because her lover might just use her. First Love has one simile in it. ''Her face it bloomed like a sweet flower'' This is a simile that describes the woman's face. The simile has sibilance a soft, sharp contrast. The S's make the simile more enjoyable. The languages in all three poems are very easy to understand, this is because love is very similar now as it was back then. To conclude my essay I think that A Woman to Her Love interprets love the best because it tells us the negative points then the positive points. I do not like My Last Duchess as it is too long and has no stanzas; this means that it is sometimes hard to interpret. First Love is a very good poem because gives us an account of what happens to his first love and how it went wrong. It also has neat paragraphs that make it easier to interpret. ...read more.