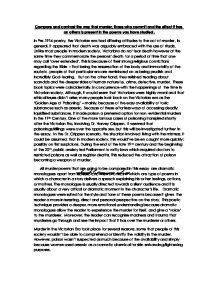 Compare and contrast the way that murder, those who commit and the effect it has on others is present in the pre-1914 poems you have studied.

Compare and contrast the way that murder, those who commit and the effect it has on others is present in the poems you have studied. In Pre-1914 poetry, the Victorian era had differing attitudes to the act of murder, in general. It appeared that death was arguably embraced with the use of rituals. Unlike most people in modern society, Victorians do not fear death however at the same time they commemorate the persons' death for a period of time that one may call 'over-extended'. This is because of their strong religious convictions regarding the Bible - that being the resurrection of the body and immortality of the soul etc. people of that particular era are reminisced on as being prudish and incredibly God-fearing. But on the other hand, they relished reading about scandals and the deeper sides of human nature i.e. crime, detective, murder. These book topics were coincidentally, in concurrence with the happenings of the time in Victorian society. Although, it would seem that Victorians were highly moral and that ethical issues didn't arise; many people look back on the Victorian era as the 'Golden Age of Poisoning' - mainly, because of the easy availability of toxic substances such as arsenic. Because of these effortless ways of accessing deadly liquidised substances, it made poison a preferred option for non-evidential murders in the 19th Century. One of the more famous cases of poisoning transpired shortly after the Victorian Era, involving Dr. Harvey Crippen. It seemed that poisonings/killings were over the opposite sex, but this will be investigated further in the essay. In the Dr. Crippen scenario, the situation involved living with the mistress. It could be assumed, that in modern society, this would've been caught more quickly; possibly on first suspicions. During the end of the late 19th century and the beginning of the 20th, public anxiety led Parliament to ratify laws which required doctors to restricted poisons as well as register deaths. ...read more.

This is an obsessive quality. The other occurrence is the brothers' interest in Isabella's relationships' which led to an obsession and murder. From casual inklings 'And, furthermore, her brethren wonder'd much' to an unnecessary act 'Yet they contriv'd to steal the Basil-pot, / And to examine it in secret place' which could've been resolved with communication with Isabella. Lastly, their suspicion-now-obsession of Isabella's activities led to shame 'The guerdon of their murder they had got' and 'Away they went, / With blood upon their heads, to banishment'. Isabella's journey of depression and obsession leads to her miserable death 'And so she died forlorn/Imploring for her Basil to the last'. Control is normally stemmed from insecurity or lack of stability mentally. This is shown in this extract, 'prize was all for Isabella' which denotes an unusual contrast where she is calling something dead "a prize". This could make the reader question her wellbeing. The victim, Isabella is showing that murder can harm survivors but also that it is a time to mourn for an extended period of time. Possibly, the poet was trying to exemplify how some or many Victorians dealt with death and used Isabella as an example, as her behaviour by some could not be labelled as normal. An example being 'With tears, as chilly as a dripping well' from the contrast between 'tears' and the tears being 'chilly', the reader could question her sanity, and view her as matter-of-fact and cold towards the situation - by removing her emotions making the tears cold. It could be assumed that Isabella was only crying because of the principle and the expectation for her to cry (as a surviving victim and as part of the Victorian society) - this can also symbolise obsession as she is still fixating herself upon it instead of continuing with life. However, her tears could be 'chilly' because she is numb to this death - his death could've left her feeling desensitized to other situations. ...read more.

This is shown through lines 'Had... I but met' which denotes a wishful tone and imagining another circumstance. Also, by using punctuation such as ellipses it shows either hesitancy or thought. Furthermore, the constant referral to the incidence elucidates that it has made a significant effect on him. This is shown in the 2nd stanza 'I shot at him and he at me, /And killed him in his place' - through saying this, it shows his matter-of-fact and emotionless front. He doesn't wish to think more deeply about his actions because he regrets them. The writer suggests this through punctuation such as dashes which emphasise his pauses for thought, as well as contrasting connectives such as 'although' which shows a degree of uncertainty. As a conclusion, various attitudes to murder have been discussed and analysed including: lack of motive, the motive of jealousy/anger/revenge/arrogance, control/obsession, pressure and excitement from murder and violence, the horror of death being ignored and death taken lightly/not taken lightly. 2 of Roberts Brownings' poems: Porphyria's Lover and My Last Duchess have been viewed as the harshest - he goes on the values that feeling sympathy for a murderer is immoral and therefore sets more extreme poems in the past. Comparing to Thomas Hardy which shows that murder can make you think deeply about humanity and it is possible to regret it with 'The Man He Killed'. It has also been shown that death effects people around us 'Isabella and the Pot of Basil'. Murder motives' are extremely questionable in modern times, because people may think the incentive doesn't need to spiral into taking ones' life. Murder was quite common before 1914 and this has been reflected into the poems of that decade; conversely this era was supposed to be completely religious. This can make the reader question the honesty of religion, and/or if poems were a subtle way of letting readers during and after that era, know the untold in their society without making a bold statement. ...read more.