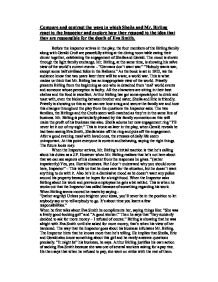 Compare and contrast the ways in which Sheila and Mr. Birling react to the Inspector and explore how they respond to the idea that they are responsible for the death of Eva Smith.

Compare and contrast the ways in which Sheila and Mr. Birling react to the Inspector and explore how they respond to the idea that they are responsible for the death of Eva Smith. Before the inspector arrives in the play, the four members of the Birling family along with Gerald Croft are peacefully sitting at the dining room table eating their dinner together, celebrating the engagement of Sheila and Gerald. The mood is shown through the light family exchange. Mr. Birling, at the same time, is showing his na�ve view of the world's current events - "Germans don't want war." "Nobody wants war, except some half civilised folks in the Balkans." As the book is set in 1912, we the audience know that two years later there will be a war, a world war. This is what makes us think that Mr. Birling has an inappropriate view of the world. Priestly presents Birling from the beginning as one who is detached from 'real' world events and someone whose perception is faulty. All the characters are sitting in their best clothes and the food is excellent. Arthur Birling has got some special port to drink and toast with, even the bickering between brother and sister, Sheila and Eric is friendly. Priestly is showing us this so we can see how smug and secure the family are and how this changes throughout the play from the questions the Inspector asks. ...read more.

Eric says that Eva Smith shouldn't have been sacked for showing a bit of spirit and asking for a raise. Sheila agrees with Eric that "these girls aren't cheap labour - they're people." Sheila's responses start to change when her fianc�, Gerald Croft, recognises the name "Daisy Renton" and finds out that Daisy Renton and Eva Smith are the same person. Then he tells Sheila that he had been seeing a girl called Daisy Renton when he should have been seeing her. Sheila changes from being a mild, well-behaved and blushing bride-to-be from in Act 1, into a determined and stubborn woman, in a way, similar to her parents. Although her overall presentation in the play is not is not like those of her parents. First, she insists on staying in the room, and then demands more details from Gerald about his affair with Eva/Daisy. After that, she goes on to warn her mother not to avoid the questions which the Inspector asks and she becomes more like the Inspector herself, hassling Gerald and her mother at key moments. She turns into the strongest member of the family, with the confidence to interrupt and pass judgement on both her mother and Gerald. Evidence that the Inspector uses to hint that Sheila has contributed to Eva Smith's death is that she had her turned out of her second job and that Arthur started it all by sacking Eva Smith in the first place. ...read more.

And how Sheila responds is that she does see her part in the death of Eva Smith but differently. Some values you could learn through the play are to treat and respect everybody as equals because that is what they deserve. To be prejudiced is a problem that people should address and try to improve on because it is very hurtful to others. If you have ever done something wrong then the play makes you think about it and what you should do if you are ever in that situation again. The best thing to do if you are in trouble or if you have done something wrong is to talk about it, however hard that might be. The important thing is to try to correct it because if you do not then it just blows up out of proportion. This is shown well in the play when Sheila realises that she should have said something about Eric's drinking problem as it is the main reason that he got into his terrible situation. You should have an open mind, try to improve any faults in your personality and be open to others. The main thing that the play wants people to improve on, is to have more consideration for everybody and life does not revolve around money but compassion for others. Another message that is underlined throughout the play is that all classes have different material wealths but when it comes to feelings and sensitivities, we are all equal. The final message of the play is a plea for change, a change in human nature first, then a change in society. ?? ?? ?? ?? ...read more.