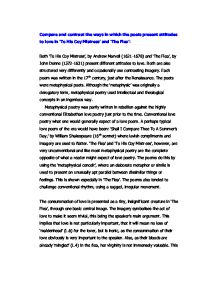 Compare and contrast the ways in which the poets present attitudes to love in 'To His Coy Mistress' and 'The Flea': Both 'To His Coy Mistress', by Andrew Marvell (1621-1678) and 'The Flea', by John Donne (1572-1631) present different attitudes to love. Both are also structured very differently and occasionally use contrasting imagery. Each poem was written in the 17th century, just after the Renaissance. The poets were metaphysical poets. Although the 'metaphysic' was originally a derogatory term, metaphysical poetry used intellectual and theological concepts in an ingenious way. Metaphysical poetry was partly written in rebellion against the highly conventional Elizabethan love poetry just prior to the time. Conventional love poetry what one would generally expect of a love poem. A perhaps typical love poem of the era would have been: 'Shall I Compare Thee To A Summer's Day,' by William Shakespeare (16th sonnet) where lavish compliments and imagery are used to flatter. 'The Flea' and 'To His Coy Mistress', however, are very unconventional and like most metaphysical poetry are the complete opposite of what a reader might expect of love poetry. The poems do this by using the 'metaphysical conceit', where an elaborate metaphor or simile is used to present an unusually apt parallel between dissimilar things or feelings. This is shown especially in 'The Flea'. The poems also tended to challenge conventional rhythm, using a ragged, irregular movement. ...read more.

to cherish every part of her. By using exaggeration the speaker flatters the Coy Mistress. This presents the attitude that love is appreciative and generous, yet it also implies that the speaker will go to any lengths to persuade her, as this flattery is unrealistic and could be insincere. The use of exaggeration is also significant because it mocks the conventional love poetry of that time. John Donne does not use this technique as such, as the whole poem uses an extended metaphor, creating a more logical argument. But Donne does use other persuasive devices, such as alliteration to create a 'hissing' effect, using repeated 's' sounds are used to describe how the flea 'suck'd' (L.3) their bloods. The sibilant sounds create an almost forceful tone of persuasion. They also shows that his love is wanton, he has an urgency to be with the lover. The caesura in 'To His Coy Mistress' acts as a pause in the speaker's argument to emphasise his 'echoing song' (L.27) The point he seems to be trying to make is that in death, there is only silence, and that the Coy Mistress will no more be subject to such wooing and flattery. The caesura presents the attitude that love can be stopped and started, especially as this breaks the fluid motion of the poem. Similarly, in 'The Flea', there is a caesura: 'and this, alas!' ...read more.

However, I do not think they are particularly serious or reverent poems. They do incorporate humour in their arguments, such as the speaker in 'To His Coy Mistress' being suited to the 'tide of Humber' (L.7) They also seem to be mocking conventional love poetry at times, for example the use of phallic imagery in 'To His Coy Mistress'. The way that the speakers in the poems seduce their lovers does actually show how similar love over 300 years ago is to today. For example, both speakers seem to use whatever ploys they can to seduce their lovers, and in 'The Flea' especially, the speaker's argument changes to suit the lover's actions. This is significant as it shows that although he appears dominant in the relationship, he is still completely reliant on the lover. This indicates that typical relations between men and women were that men had the power over women in a sense, yet here this woman's permission is essential. The fact that Marvell uses time imagery is relevant to love in the 21st century as his issue that time is always 'hurrying near' (L.22) seems to give Carpe Diem a great significance. It seems that his strong confidence can have great influence on not only the lady that he is wooing but also the world. The passion expressed and the underlying message translates into the modern clich� that life is simply 'too short' to suppress true love. � Note: This point was researched on the Internet. ...read more.