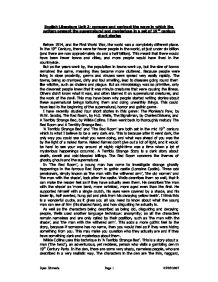 Compare and contrast the ways in which the writers present the supernatural and mysterious in a set of 19th century short stories.

English Literature Unit 2: compare and contrast the ways in which the writers present the supernatural and mysterious in a set of 19th century short stories Before 1914, and the First World War, the world was a completely different place. In the 19th Century, there were far fewer people in the world, at just under six billion (and there are now approximately six and a half billion). This meant that there would have been fewer towns and cities, and more people would have lived in the countryside. But as the years went by, the population in towns went up, but the size of towns remained the same, meaning they became more cluttered. Because people were living in close proximity, germs and viruses were spread very easily rapidly. The towns, being so cramped, dirty and foul smelling, lead to diseases going round them like wildfire, such as cholera and plague. But as microbiology was so primitive, only the cleverest people knew that it was minute creatures that were causing the illness. Others didn't know what it was, and often blamed it on supernatural creatures, and the work of the devil. This may have been why people started writing stories about these supernatural beings torturing them and doing unearthly things. This could have lead to the beginning of the supernatural, horror and gothic genre. I have recently studied four short stories in this genre: The Monkey's Paw, by W.W. ...read more.

Then a large elbow-chair...' The room makes me think of old fashioned antique furniture, which I think, is very gothic as it reminds you of all the people who may have owned it and the ghosts that may be contained within the wood. In The Red Room, the room at Lorraine Castle is where a young duke had dies, or actually had began to die, and so the ghosts are said to have haunted the room. That is why the young man is there, because he is there to investigate the paranormal happenings in the room (a Paranormal Investigator if you will). As this, the young man has to go to some very dire places. The Red Room is probably not as nasty as some, but it's not really the really the place where you would like to live, or even come to visit as a one-off; but Wells describes it as if you know where every minute detail, and crack in the wall is, although you have never been there. 'Looking around that large sombre room, with it's shadowy window bays, its recesses and alcoves...its black corners, its germinating darkness.' The room would be an extremely scary place to be, let alone trying to catch a ghost. But the young man didn't just have to get rid of the ghost; he had to do it with on eof the worst light sources ever - the candle. ...read more.

Wilkie Collins uses a different method to build up tension. In A Terribly Strange Bed, a common sensation is used to add tension - being drunk. Collins describes the time the hero is drunk so well, that it can actually make you start to feel like the hero is feeling. After the hero is drugged, the hero explains what he is going through. 'The room whirled round and round furiously; the odd soldier seemed to be...bobbing up and down...I was half deafened...bewilderment, helplessness, idiocy, overcame me'. You feel as if you are the one who is drunk, like you can do nothing to help yourself, like what the hero would have been feeling. And, as most writers will know, if the reader is 'there', it will be more 'real' and if the character is feeling tense, so will the reader. In conclusion, both stories have similarities, such as: both are short stories which use tension to draw the reader in, and they both have a dark inner story. But they also have differences, like they are set in completely different places, contain different types of characters and have opposite types of stories, although they both contain themes of death. Lastly, in my opinion, they are both extremely good views on what the world was like before 1914, and now it will never be anything like it was back in the 19th Century. It's almost as if it was completely different culture where The Red Room and A Terribly Strange Bed are set. Ryan Edwards Page 1 07/05/2007 ...read more.