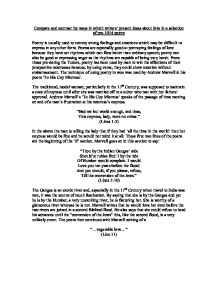 Compare and contrast the ways in which writers' present ideas about love in a selection of pre-1914 poetry Poetry is usually used to convey strong feelings and emotions which may be difficult to express in any other form. Poems are especially good at portraying feelings of love because they have set rhythms which can flow better than ordinary speech; poetry can also be good at expressing anger as the rhythms are capable of being very harsh. From times pre-dating the Tudors, poetry has been used by men to win the affections of their prospective mistresses because, by using verse, they could show emotion without embarrassment. The technique of using poetry to woe was used by Andrew Marvell in his poem 'To His Coy Mistress'. The traditional, model woman, particularly in the 17th Century, was supposed to maintain a state of coyness until after she was married off to a suitor who met with her fathers' approval. Andrew Marvell's 'To His Coy Mistress' speaks of the passage of time moving on and of a man's frustration at his mistress's coyness. "Had we but world enough, and time, This coyness, lady, were no crime." (Lines 1-2) In the above the man is telling the lady that if they had 'all the time in the world' then her coyness would be fine and he would not mind it at all. These first two lines of the poem are the beginning of the 'if' section. ...read more.

Conversely, in the final section of the poem Marvell writes that the couple should be like "...amorous birds of prey..." This kind of love is not dignified and it is the antithesis of what the woman was being promised in the first section. It is in this final section when the man's sexual frustration pours out almost as anger at her previous refusal to embark on anything other than a non-physical relationship. In this poem the fury is mixed with humour so it is not particularly dark. There are some poems, however, where the anger that love can cause is much more apparent. William Blake's 'The Sick Rose' is a very short and yet disturbing poem which begins with the exclamation: "O Rose thou art sick." (First line) This is an extremely direct and thought provoking opening. The word "Rose" begins with a capital letter suggesting it is a name or title. Roses are usually seen as being blood red and the symbol of passion; they are exquisitely beautiful to look at and to smell and yet below their ornate, delicate flowers lay stems of piercing thorns. When one thinks of a sick rose one imagines something dry, brown, wilted and devoid of beauty and nonetheless still with thorns that maintain their ferocity. The fact that women, especially if they are English, are referred to as 'roses' suggests to me that Blake's words are not referring to a plant. ...read more.

It thinks that love is selfless and gives itself up freely in order that people might experience the joy that it brings. In the Clod's optimistic opinion, love will rid the world of evil and turn it into a "Heaven in Hells despair". In Hardy's poem, however, love has caused nothing but feelings of bitterness which will never be forgotten. In conclusion, love is presented by poets in many different ways. Some poets' picture love as something that is selfless and wonderful, some depict love as something that causes more pain than joy and some, like Marvell, seem to think that love really counts for nothing if there is no passion involved. All of the poems covered in this essay do agree that love is an intense emotion that will make one feel a whole host of other sensations as well. Whether love evokes desire, in the case of "To His Coy Mistress", or anger, in the case of "The Sick Rose", these poets concur that it will always stir up some separate feelings as it progresses. It is interesting that all of these poems were written by men, supposedly about their love for the women who are traditionally meant to bow to their every whim. However, the women in these poems went totally against tradition and did not obey their 'masters'. As well as love being presented in different ways in these poems there are also different types of love being presented but, the fact remains, whether the poets were writing about their love being 'vegetable' or otherwise, they were all affected by it whether they liked it or not. Kayleigh Fitzgerald 10H ...read more.