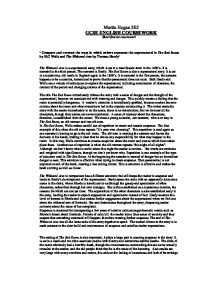 'Compare and contrast the ways in which writers represent the supernatural in The Red Room by H.G Wells and The Withered Arm by Thomas Hardy'.

Martin Hogan 5E2 GCSE ENGLISH COURSEWORK Short Stories coursework ' Compare and contrast the ways in which writers represent the supernatural in The Red Room by H.G Wells and The Withered Arm by Thomas Hardy' The Withered Arm is a supernatural story, which is set in a west Sussex town in the 1800's. It is narrated in the third person. The narrator is Hardy. The Red Room is also a supernatural story. It is set in a mysterious, old castle in England again in the 1800's. It is narrated in the first person, the narrator happens to be a scientist, determined to prove that the paranormal does not exist. Both Hardy and Wells use a variety of techniques to explore the supernatural, including examination of character, the context of the period and changing notions of the supernatural. The title The Red Room immediately imbues the story with a sense of danger and the thought of the supernatural, because we associate red with warning and danger. This quickly creates a feeling that the room is potentially dangerous. A reader's attention is immediately grabbed, because readers become curious about the room and what events have led to the mystery surrounding it. ...read more.

The rushed climax to the story is in stark contrast to the slow build and maintenance of suspense and satisfies reader expectations. The setting of The Red Room is also important, it plays a large part in creating suspense in the story .It is set in a castle and we often associate castles with history and sometimes terrible deaths. The duke of the castle obviously had a horrible death, though the circumstances surrounding this are never actually revealed to the reader, and the old people think that he is the cause of the haunting. Also castles are very large with many corridors and rooms, this adds to the feeling of uneasiness and lack of knowledge of the castle. As the narrator makes his way to the red room he becomes less and less rational as the feeling of insecurity sets in. 'I stood rigid for half a minute perhaps'. Although the man knows there is nothing there he still becomes taken in by the blackness of the whole castle. 'The darkness was there' Still we have not actually seen or heard that anything is there. As the man continues down the corridor he becomes more and more aware of the shadows around him. ...read more.

Gertrude can also be seen as evil as she was the one who appeared in the dream in the first place. She could be involved with witchcraft because it's She is the person who actually got hit down. Also the fact that she mixes with hangmen and Trendle show the fact she is going to the evil side of society. The reader does not know which one is the real source of evil even though Rhoda is the only one to exist this is left in suspense, which creates tension. As well as the consideration of the paranormal, how could this nice young house wife turn into an obsessive mean character. In The Red Room the language describing the journey to the red room is effective as it shows the sinister and cold feeling of the house "The echoes rang up and down the spiral staircase". Darkness is a vital part of the red room; "subterranean passage" suggests darkness and an enclosed room that I think is compared to a tomb. The descriptions "deep-toned", "chilly" and "echoing" are effective words, which sets the atmosphere and mood for what is about to occur in the red room. This leaves the reader guessing what is about to happen in the ghost-haunted room and in response the reader is on the edge of their seat. ...read more.