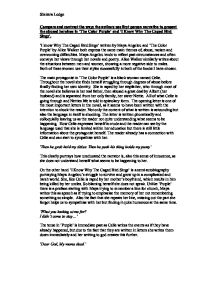 Compare and contrast the ways the authors use first person narrative to present the abused heroines in 'The Color Purple' and 'I Know Why The Caged Bird Sings'.

Compare and contrast the ways the authors use first person narrative to present the abused heroines in 'The Color Purple' and 'I Know Why The Caged Bird Sings'. 'I know Why The Caged Bird Sings' written by Maya Angelou and 'The Color Purple' by Alice Walker both express the same main themes of, abuse, racism and overcoming difficulties. Maya Angelou tends to reflect past circumstances and often conveys her views through her novels and poetry. Alice Walker similarly writes about the situations between men and women, showing a more negative side to males. Both of these women use their styles successfully in both of the books I have chosen. The main protagonist in 'The Color Purple' is a black woman named Celie. Throughout the novel she finds herself struggling through degrees of abuse before finally finding her own identity. She is raped by her stepfather, who through most of the novel she believes is her real father, then abused a great deal by Albert (her husband) and is separated from her only family, her sister Nettie. All of what Celie is going through and Netties life is told in epistolary form. ...read more.

When Celie finds out that Shug is coming to town, her tone in which she writes changes and is more of an exciting tone. 'Shug Avery is coming to town!' Not only does this allow the reader to get excited along with her but it also portrays a sense of happiness in which Celie is feeling. Further on in the same letter Celie talks about how Mr is getting ready to see Shug sing and how he is making a huge effort, 'Look at himself, then undress and dress all over again' The way in which Celie describes Albert allows us as the reader to imagine him scampering about asking her opinions, this also add humour to the novel which is a minor element conveyed throughout. Also Celie gives Albert a compliment for the first time and he responds, You think so? She as well as the reader finds this surprising, as he never asks her opinion on anything. It shows their development together and the slight effort to understand each other. By the end of this letter we find that Celie begins to admire Shug giving this sense of her finally admitting what she likes for a change. ...read more.

Even though at this point Celie becomes more assertive her reasons for being so angry at Albert is not because he abused her but for taking Nettie away from her. 'You took my sister away from me, I say' This provokes the reader as they want Celie to start thinking about her and what seem to be going on within her life but yet she is still concerned about others. Also her way of addressing Albert is 'Mr___' showing her to be weak, at the end of the novel she finally calls him Albert equalising herself with him and conveying her strength, growth and her as an independent woman. 'Oh I say, a little Albert carve for me' Like Caged Bird the book ends with the main protagonist finally being happy which the reader has been awaiting. It ends with Celie and Nettie finally being reunited and Celie expresses her feelings more clearly than she ever in the book to promote her happiness. Caged Bird is written into chapters with the language contrasting along with the narrator's voice. The language is quite complex conveying the adult but also the child speaking as an adult, portraying the idea that Maya felt she had to grow up much quicker due to what happened to her. ...read more.