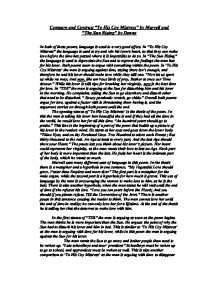 Compare and Contrast "To His Coy Mistress" by Marvell and "The Sun Rising" by Donne In both of these poems, language is used to a very good effect. In "To His Coy Mistress" the language is used to try and win his lovers heart, so that they can make love before the time has passed where it is impossible to do so. In "The Sun Rising" the language is used to depreciate the Sun and to express the feelings the man has for his lover. Both poems seem to argue with something within the poem. In 'To His Coy Mistress' the man is arguing against time, saying there isn't enough, and therefore he and his lover should make love while they still can. "Now let us sport us while we may; And now, like am'rous birds of prey, Rather at once our Time devour." While his lover is still ripe for breaking her virginity, now is the best time for love. In "TSR" the man is arguing at the Sun for disturbing him and his lover in the morning. He complains, telling the Sun to go elsewhere and disturb other that need to be disturbed. ...read more.

In the second stanza of 'To His Coy Mistress' he man realizes that time cannot be stopped and wants to spend time well, but in this poem the man is bragging about how his lover is better than the Sun. So whereas in 'To His Coy Mistress' the man has realised that he cannot win against time, but in this poem the man continues to argue with the involvement of his lover. The man then goes on to tell the Sun to go away and come back later tomorrow, meanwhile he should go and see if the spices and gold are still where the Sun left them or if they are here with the man. This is a metaphor for his lover being as precious as gold and Indian spices. "Whether both th' Indias of spice and mine Be where thou left'st them, or lie here with me." There is also a metaphor in 'To His Coy Mistress' which describes his lover's body, "Nor, in thy marble Vault, shall sound," this is also another metaphor for the male organ. Both poems are describing the man's lover in the second stanza. ...read more.

to argue, but them realises he cannot win and decides to spend the time they have together well, instead of continuing an argument he is not going to win. The man in 'The Sun Rising' could be described as stubborn as he will not give up for his lover's sake, but the man in 'To His Coy Mistress' also takes the path he feels is best for his lover, so both poems are about the men's lovers being the most important thing. In 'To His Coy Mistress' Marvell uses capital letters well to express important words like: "Vaster than Empires and more slow." But in 'The Sun Rising' Donne doesn't use capital letters but they both use pauses well throughout their poems to let the reader think about what is being said. 'To His Coy Mistress' and 'The Sun Rising' are similar but are also different, as one has a continuous mood and the other one's mood changes. 'The Sun Rising' is continuous, and 'To His Coy Mistress' changes. But they both concentrate on the lover and the man. Both have the man speaking throughout the poem with mentions of their lovers, but nobody else has a say throughout both poems. (2,033 Words) By Sean Stallwood ...read more.