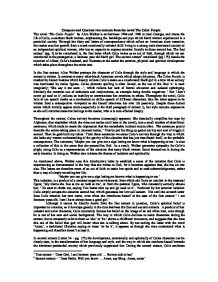 Compare and Contrast two extracts from the novel The Color Purple

Compare and Contrast two extracts from the novel The Color Purple The novel 'The Color Purple' by Alice Walker is set between 1904 and 1940 in rural Georgia, and traces the life of Celie, a southern black woman, emphasising the hardships and joys which black women experienced in a patricidal society. Through her diary and letters of correspondence which reflect an American slave narrative, the reader sees her growth from a meek emotionally isolated child living in a strong male dominated society to an independent spiritual woman, who has an capacity to express emotion fluently to those around her. The first extract1 (pg. 3) to be considered is, the first letter which Celie writes as an act of faith, through which we are introduced to the protagonist, a fourteen year old black girl. The second extract2 considered (pg.175) details the rejection of Albert, Celie's husband, and illustrates to the reader the emotion, physical and spiritual development which takes place throughout the entire text. In the first extract, Alice Walker portrays the character of Celie through the style and language in which the extract is written. In contrast to many other black American novels which adopt rich prose, The Color Purple, is marked by dialect features which keenly reflects Celie's status as a uneducated black girl in a time when society was dominated by males figures. ...read more.

During the second extract, Celie confronts Albert about his obsessive treatment of her and the hiding of Nettie's letters, as well as to tell him of her plans to go with Shug and start a new life'. In contrast to the first extract in which she adopts a purely passive narrative voice, Celie is now able to articulate her emotions fluently to those around her. She does this through the coarse language and tone yet still retaining the uncomplicated narrator role; ' The jail you plan for me is the one in which you will rot, I say'. This is in vast contrast to the feeling of childhood innocence, found in the first extract, for now she expresses strong negative emotions. As a product of this, she losses the brief immediacy which Walker used to instil pathos in the reader, however her dialogue contains a number of effective statements and rebuttals, which makes the reader side with Celie. 'Any more letters come? I ast. He say, What? You heard me, I say. Any more letters from Nettie come?.' This new-founded conviction and ability to initiate conversation illustrates her inner strength and belief in herself to challenge others, thus in the eyes of the reader, she now appears equal to that of Albert as she openly confronts him. ...read more.

Goddam, he say, you nothing at all ' Both men see women as objects without emotions, alluding to the idea of slaves. In the case of Albert, his contempt for women obstructs his awareness of the true person (Celie) he married. It is only after he losses her during the second extract, does he realise a woman's importance in life, and how dependant men are on them. It must be noted however, that to a certain extent there exist female characters within both extracts, namely Celie's mother and Shug, which are able to assert some control over the male figure. In conclusion, the two extracts represent different stages within the emotion and spiritual development of the protagonist, Celie. From a young na�ve southern black girl she matures to independent, emotionally fluent woman capable of functioning freely within a male dominated society. In doing show, Alice Walker provides the reader with a stark image concerning the hostility and dominance of the male society over women during the time. 1 First extract - 'Dear God, I am fourteen years old ... But too sick to last' 2 Second extract - ' Dear Nettie, Well you know ... Amen, say Shug. Amen, amen' 3 Towards the end of the novel after the second extract Albert's views on women do change. ?? ?? ?? ?? ...read more.