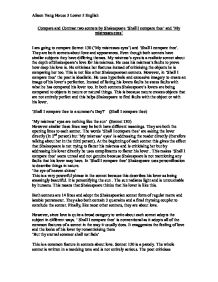 Compare and Contrast two sonnets by Shakespeare 'Shall I compare thee' and 'My mistresses eyes'.

Compare and Contrast two sonnets by Shakespeare 'Shall I compare thee' and 'My mistresses eyes' I am going to compare Sonnet 130 ('My mistresses eyes') and 'Shall I compare thee'. They are both sonnets about love and appearances. Even though both sonnets have similar subjects they have differing themes. My mistress's eyes is a realistic sonnet about the depth of Shakespeare's love for his mistress. He uses his mistress's faults to prove how deep his love is. He criticises her features instead of criticising the objects he is comparing her too. This is not like other Shakespearean sonnets. However, in 'Shall I compare thee' the poet is idealistic. He uses hyperbole and excessive imagery to create an image of his lover's perfection. Instead of listing his lovers faults he states faults with what he has compared his lover too. In both sonnets Shakespeare's lovers are being compared to objects in nature or natural things. ...read more.

However, since love is quite a broad category to write about each sonnet adopts the subject in different ways. ' Shall I compare thee' is conventional as it adopts all of the common features of a sonnet in the way it usually does. It exaggerates the feeling of love and the looks of his lover by romanticising them 'But thy eternal sommer shall not fade' This is a common feature in sonnets about love. Sonnet 130 is a parody. The whole sonnet is written in a mocking tone and is not entirely serious. The poet criticises idealism through imitation. He uses hyperbole but exaggerates his mistress's bad attributes instead of her good ones. He turns conventional images around. ' If hair be wires, black wires grown on her head' However, because both sonnets are written by the same person this is self-parody. It appears to the reader that Shakespeare has decided to mock himself to express the differences between physical love and emotional love. ...read more.

'I think my love is rare' He says this because he hasn't used the sonnet to flatter his mistress but has still described his love for her, which contradicts what he previously said about her proving that he still loves her. Even though the meaning of the poem is that beauty lies within in both sonnets Shakespeare concentrates on physical attributes which shows they still matter to Shakespeare a great deal. Sonnet 130 shows realistic love and 'Shall I compare thee...' shows romantic love. Both poems are concluded with a rhyming couplet. Both couplets are positive and describe his love for his lovers'. 'Shall I compare thee.' says that love is eternal and will live beyond anything else. Sonnet 130 says that he loves his mistress but doesn't want to compare her to things, which are too great because then she will not reach the high expectations set for her. 'As any she belied with false compare' Alison Yang House 3 Lower 5 English ...read more.