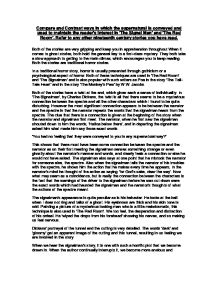 Compare and Contrast ways in which the supernatural is conveyed and used to maintain the reader's interest in 'The Signal Man' and 'The Red Room' - Refer to any other nineteenth century stories you have read.

Compare and Contrast ways in which the supernatural is conveyed and used to maintain the reader's interest in 'The Signal Man' and 'The Red Room'. Refer to any other nineteenth century stories you have read. Both of the stories are very gripping and keep you in apprehension throughout When it comes to ghost stories, both hold the general key to a first-class mystery. They both take a slow approach to getting to the main climax, which encourages you to keep reading. Both the stories are traditional horror stories. In a traditional horror story, horror is usually presented through gothicism or a psychological aspect of horror. Both of these techniques are used in 'The Red Room' and 'The Signalman' and is also popular with such writers as Poe in the story 'The Tell-Tale Heart' and in the story 'The Monkey's Paw' by W.W. Jacobs. Both of the stories have a twist at the end, which gives each a sense of individuality. In 'The Signalman', by Charles Dickens, the twist is all that there seems to be a mysterious connection between the spectre and all the other characters which I found to be quite disturbing. However the most significant connection appears to be between the narrator and the spectre in that the narrator repeats the words that the signalman hears from the spectre. ...read more.

The number three is traditional in stories: three old crones represented doom and destruction. for example the three witches in Shakespeare's 'Macbeth' and the three muses who are from greek mythology. The young man is sceptical about the red room being haunted. The three elder people believe that it is haunted and dare not even go there. Opposites build drama and drama builds tension. This is the perfect example of how opposites build tension. Firstly, we have the young against the old, which also symbolises the inexperienced against the wise. There is also the conflict between 'sceptics' and the 'wise'. Although they may be wise, the older people have not ever dared to go to the red room. They have become wise as they have heard the stories about the room but none of them has ever had first hand experience of the room. Repetition is also a device used by writers to build tension. One of the most obvious examples is on the first page. "It's your own choosing." The old man is trying to warn the young man but at the same time he is leaving the 'decision' to him. It is as if the three old people are ridding themselves of their responsibility of the young man. ...read more.

Then there is a gap in time; tension starts to unwind slowly. He wakes up the next morning after being rescued at dawn by the old people. He personifies fear with the red room. He has had a fight with his fear and in the end his fear wins. For me, the red room symbolizes one's own fear. Nothing is actually in the room except what one believes is there. This psychological technique is used equally effectively in 'The Tell-Tale Heart' H.G.Wells uses tension to make the story interesting and keep the readers attention. The method he uses is that he is denying us of information and as a reader it is far more powerful than to know the truth. We are given some vague information but the rest is held from us. In conclusion, the writers use many ways in which to create suspense in the stories, be they delaying the action, withholding vital pieces of information or even misleading the reader, these all create suspense in their own way. They are used very effectively in both of these short stories, and although the ending of 'The Red Room' is slightly disappointing, it only shows us just how much suspense has been created by Wells, as we are frustrated that this good story has such a disappointing ending. However both writers effectively create suspense in the two stories, compelling us to read the next page. ...read more.