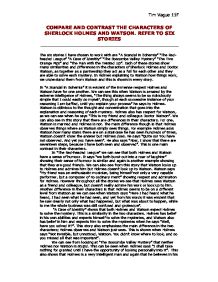 Compare and Contrastthe Characters of Sherlock Holmes and Watson. Refer To Six Stories.

COMPARE AND CONTRAST THE CHARACTERS OF SHERLOCK HOLMES AND WATSON. REFER TO SIX STORIES ______________________________________________ The six stories I have chosen to work with are "A Scandal in Bohemia" "The Red-headed League" "A Case of Identity" "The Boscombe Valley Mystery" "The Five Orange Pips" and "The Man with the Twisted Lip". Each of these stories show many similarities and differences in the characters of Sherlock Holmes and Doctor Watson, as together as a partnership they act as a foil for each other and they are able to solve each mystery. In Holmes explaining to Watson how things work, we understand them from Watson and this is shown in every story. In "A Scandal in Bohemia" it is evident of the immense respect Holmes and Watson have for one another. We can see this when Watson is amazed by the extreme intelligence of Holmes, "The thing always seems to be so ridiculously simple that I could easily do myself, though at each successive instance of your reasoning I am baffled, until you explain your process" he says to Holmes. Watson is oblivious to the thought and concentration that goes into the explanation and reasoning of each mystery. ...read more.

"A Case of Identity" shows that both Holmes and Watson expect Holmes to solve the mystery. This is a similarity in the two characters. Holmes has belief in his own abilities and expects himself to solve the mysteries, and Watson also has belief in him and expects him to solve the mysteries when he says "Well, have you solved it?". This story also emphasises the main difference in the two characters; Holmes observes and Watson just sees. This is shown when Holmes says "Not invisible, but unnoticed, Watson. You didn't know where to look, and so you missed all that was important". We can see from looking at "The Boscombe Valley Mystery" that neither Holmes nor Watson is stupid. This can be seen when Holmes says "I shall take nothing for granted until I have the opportunity of looking personally into it". This also shows that Holmes is a very intelligent man and again that he believes in his own ability to solve the mystery. This can also be seen when Watson says "I am afraid that the facts are so obvious that you will find little credit to be gained out of this case" but Holmes says "There is nothing more deceptive than an obvious fact" showing he is very intelligent. ...read more.

Another thing again shown in this story is the respect Holmes and Watson have for one another. This time it is Holmes complimenting Watson - "Oh, a trusty comrade is always of use. And a chronicler still more so". Holmes also shows respect for Watson when he says "You have a great gift of silence, Watson. It makes you quite invaluable as a companion". I feel he is saying Watson is a great listener. In conclusion I can see many similarities and many differences in the characters of Sherlock Holmes and Doctor Watson. Holmes seems to be a bit more in control than Watson and can be a bit impatient and moody. Watson is a patient character who is often happy. One major similarity in their characters is the respect they have for one another. They are colleagues but also good friends. They both trust each other and appreciate what the other does. The main difference in the characters throughout the stories is the fact that Holmes is far more observant than Watson. Holmes observes and Watson just sees. Another major difference is that Holmes seems to be the "leader" as Watson often just does as Holmes tells him. I think that they can be similar at times but they are mainly quite different characters. Tim Vague 11F ...read more.