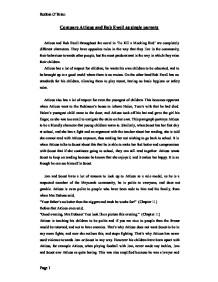 Compare Atticus and Bob Ewell as single parents Atticus and Bob Ewell throughout the novel in 'To Kill a Mocking Bird' are completely different characters. They have opposites roles in the way that they live in the community, their behaviour towards other people, but the most predominant is the way in which they raise their children. Atticus has a lot of respect for children; he wants his own children to be educated, and to be brought up in a good world where there is no racism. On the other hand Bob Ewell has no standards for his children, allowing them to play truant, having no basic hygiene or safety rules. Atticus also has a lot of respect for even the youngest of children. This becomes apparent when Atticus went to the Robinson's house to inform Helen, Tom's wife that he had died. Helen's youngest child came to the door, and Atticus took off his hat and gave the girl his finger, as she was too small to navigate the stairs on her own. This paragraph portrays Atticus to be a friendly character that young children warm to. Similarly, when Scout has her first day at school, and she has a fight and an argument with the teacher about her reading, she is told she cannot read with Atticus anymore, thus making her not wishing to go back to school. ...read more.

He shows no interest in his son, Burris' welfare whatsoever. It is apparent that Bob Ewell is not bothered as to how his son dresses for school, or even what happens to him there. His son's cleanliness and hygiene is obviously not a priority and he has certainly not taught him any manners. Scout describes Burris Ewell as, "The filthiest human I had ever seen. His neck was dark grey, the back of his hands were rusty, and his finger-nails were black deep into the quick." Scout had described Burris Ewell in this way due to the fact he had frightened the teacher by revealing the cootie in his hair. Astonished to have seen the cootie, Miss Caroline told Burris to go home and wash his hair, but Burris said he was leaving "I done done my time for this year!" (Chapter 3) Burris even made sure Miss Caroline was crying before he left. Even the children of Maycomb know what kind of people the Ewells are, because when Miss Caroline was puzzled from when Burris said he had done done his time for this year, a member of the class said, "He's one of the Ewells, ma'am" (Chapter 3) The Ewells had not been educated for three generations and Bob Ewell is bringing up his children as his father and grandfather had raised him. ...read more.

From these events it clearly shows that Atticus is a very loving father, from how he teaches his children manners to be polite, and to try and make them have happy lives in Maycomb. Bob Ewell does not really care about his children, does not show any interest. If Bob Ewell did not like what his children had been doing, or was angry with them he would probably use violence to have control. Atticus would not. Atticus would find a solution to the problem. Atticus is always a very loving father and will always try and protect his children. Surprisingly you could say Bob Ewell wants to also protect his children from the rest of the community because he was trying to protect his daughter Mayella from the rest of the community because he thought it was the right thing to do. As of his deep set hatred for the community from which he lives he cannot show this care for his children in the right way. So even though these two characters are opposite in the way they act, they are similar in protecting their children; Atticus knows how to protect his children in the right way, but Bob Ewell doesn't, which makes him vicious and violent towards Maycomb and even his own children. ?? ?? ?? ?? Robbie O'Brien Page 1 ...read more.