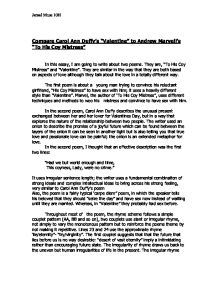 Compare Carol Ann Duffy's "Valentine" to Andrew Marvell's "To His Coy Mistress" In this essay, I am going to write about two poems. They are, "To His Coy Mistress" and "Valentine". They are similar in the way that they are both based on aspects of love although they talk about the love in a totally different way. The first poem is about a young man trying to convince his reluctant girlfriend, "His Coy Mistress" to have sex with him; it uses a heavily different style than "Valentine". Marvel, the author of 'To His Coy Mistress", uses different techniques and methods to woo his mistress and convince to have sex with him. In the second poem, Carol Ann Duffy describes the unusual present exchanged between her and her lover for Valentines Day, but in a way that explores the nature of the relationship between two people. The writer used an onion to describe the promise of a joyful future which can be found between the layers of the onion it can be seen in another light but is also telling you that true love and passionate love can be painful; the onion is an extended metaphor for love. ...read more.

She has obviously been hurt in previous relationships. Given your lover an onion is not being realistic, think about it. Would you give your lover an "onion" as a Valentines gift? The speaker of the poem offers her lover an onion as a Valentine gift. This is clearly not a conventional gift like "satin hearts" or "red roses" nevertheless she gives an onion because it represents her love in many different ways such as the layers of the onion is equivalent to the layers of her relationship. She continues through the poem comparing different characteristics of the onion to different characteristics of her love. The poem is universal: it could be any lover to any beloved as there is no indication of the sex of either the "I" or the "you" whereas "To His Coy Mistress" is very gender specific. The structure of this poem is the way in which a poet chooses to set the poem out, this includes rhyme schemes, rhythm patterns, word or sentence and the way the lines are laid out. ...read more.

The symbolism of the poem conveys on urgency to act now before the opportunity to live our lives to their maximum capacity runs out. Out of the two poems I thought 'Valentine' was more effective. I also enjoyed it more than 'To his coy mistress'. This was because of the unusual layout and content of the poem. One of the main features I enjoyed and liked about 'Valentine' is its title. Simply as it is misleading, giving it hidden qualities. As you wouldn't imagine a poem called 'Valentine, to be about an onion. The directness and shortness appealed to me, especially over the long 'To his coy mistress'. Thus all considered I prefer 'Valentine'. All in all both of these poems illustrate love in an uncanny and bizarre way. The lead us to ask the question: 'What is love?' especially as two loved based poems have such dissimilar content and context but yet are both to do with 'love'. Jamal Muse 10H ...read more.