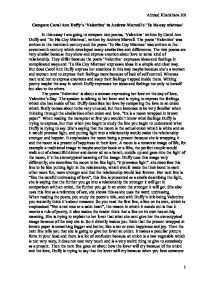 Compare Carol Ann Duffy's 'Valentine' to Andrew Marvell's 'To his coy mistress' In this essay I am going to compare two poems, 'Valentine' written by Carol Ann Duffy and 'To His Coy Mistress', written by Andrew Marvell. The poem 'Valentine' was written in the twentieth century and the poem 'To His Coy Mistress' was written in the seventeenth century which developed many similarities and differences. The two poems are very similar because they show and express emotion about love or some kind of relationship. They differ because the poem 'Valentine' expresses ideas and feelings in complicated ways and 'To His Coy Mistress' expresses ideas in a simple and clear way. But does Carol Ann Duffy express her emotions in this way maybe because she's a woman and women tend to express their feelings more because of lack of self control, Whereas men tend not to express emotions and keep their feelings trapped inside them. Writing poetry maybe the way in which Duffy expresses her ideas and feelings not only to herself but also to the others. The poem 'Valentine' is about a woman expressing her love on the day of love, Valentine's Day. The speaker is talking to her lover and is trying to express the feelings which she has inside of her. Duffy describes her love by comparing the love to an onion which firstly comes about to be very unusual, but then becomes to be very familiar when thinking through the similarities of an onion and love. "Its is a moon wrapped in brown paper" When reading the metaphor at first you wouldn't know what feelings Duffy is trying to express, but then when you begin to study the line you begin to understand what Duffy is trying to say. She's saying that the moon is the actual onion which is white and so it would promise light, and putting light into a relationship would make the relationship stronger and happier. ...read more.

in a relationship the stronger the relationship gets in comparison with the onion, as layers begin to grow the onion gets stronger. And when undressing the layers of love you make love to your lover by having sex, she may also be trying to say that when having sex the relationship also grows and having it more the stronger it'll get. The structure of the poem 'Valentine' is irregular, it has lines of its own and they do not have a sequence of approximate length of lines. It has seven stanzas including its four main ones. It includes of no rhyming words. I think the reason why Duffy has an irregular structure is because of her confused mixed feelings about her lover. Another reason about her distorted structure is because of the time she had written it in, the fashion of writing now is more broken, just like writing stories, now they tend to have a broken structure. But a few centuries back the fashion of it was to be stable, it had to have a proper beginning, middle and end. I think the way she has the irregular structure is very effective and I enjoy the way she related her mixed feelings and emotions in this way. She has many ways in which she expresses her mixed feelings such as by having lines on their own, words on their own and short words. Lines on their own are given freedom, they have a significant meaning to them, and some of them are "Not a cute card or a kissogram", "Not a red rose or a stain heart" and "I am trying to be truthful". Duffy is explaining that she doesn't want to go along the tradition and do what others always do. She wants to be different and doesn't want to be stereotypical. Short lines and words on their own are also given a large impact to it, in this poem they often tend to be quite rude and sharp. ...read more.

The quotes that represent those ideas are, from "Valentine" is "like the careful undressing of love" and from "To His Coy Mistress" is "Let us sport while we may". They both also have some doubts in the relationship. Another similarity is that they both use similes and alliteration to express ideas. There are many differences throughout the poem and the main one is the structure, "Valentine" has a very irregular and "To His Coy Mistress" is perfect. "Valentine" has lines on their own, short lines and one word lines. This reflects her mixed feelings and her unstable relationship. "To His Coy Mistress" has the perfect structure with rhyming couplets. Another difference is the language, "Valentine" is very modern and can be used in conversation in current times whereas "To His Coy Mistress" was written in the seventeenth century. In the poem "Valentine" she describes her love, the way their relationship is, and many different and astounding ideas, which reflects the idea of an irregular structure. Whereas "To His Coy Mistress" only wants one thing which is sex, he aims his poem on only one thing, this makes it very straightforward, this could reflect to the idea of a perfect structure. The poem that I enjoyed reading the most definitely had to be "Valentine", the main reason explaining this as she used imagination by making the structure irregular to represent her mixed feelings, I enjoy the way she used lines on their own and lines of different lengths. Also the language used is more modern and easy to understand. I also like the way she compared her love to an onion and the way she found comparisons. My main dislike "To his coy mistress" is his language and that it is difficult to understand. Another reason is that I don't like the way his mind works, he only loves her because he wants sex and he persuades her with religion which he is doesn't know for him self but is researched to amaze her, to deceive her. So my overall favourite poem is definitely "Valentine". ?? ?? ?? ?? Ahmed Khankhara 10I 1 ...read more.