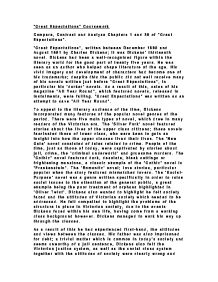 Compare, Contrast and Analyse Chapters 1 and 39 of Great Expectations.

"Great Expectations" Coursework Compare, Contrast and Analyse Chapters 1 and 39 of "Great Expectations". "Great Expectations", written between December 1860 and August 1861 by Charles Dickens; it was Dickens' thirteenth novel. Dickens had been a well-recognised figure within the literary world for the good part of twenty five years. He was seen as an author who helped shape literature of the age. His vivid imagery and development of characters had become one of his trademarks; despite this the public did not well receive many of his novels written just before "Great Expectations", in particular his 'darker' novels. As a result of this, sales of his magazine "All Year Round", which featured novels, released in instalments, were falling. "Great Expectations" was written as an attempt to save "All Year Round". To appeal to the literary audience of the time, Dickens incorporated many features of the popular novel genres of the period. There were five main types of novel, which drew in many readers of the Victorian era. The 'Silver Fork' novel featured stories about the lives of the upper class citizens; these novels fascinated those of lower class, who were keen to gain an insight into how the upper classes lived their lives. The 'New Gate' novel consisted of tales related to crime. People of the time, just as those of today, were captivated by stories about jail, crime, the 'criminal underworld' and gruesome murders. The "Gothic" novel featured dark, desolate, bleak settings or frightening mansions, a classic example of the "Gothic" novel is "Frankenstein". The 'Romantic' novel; love stories, particular popular when the story featured mismatched lovers. The 'Social-Purpose' novel was a genre written specifically in order to raise social issues to the attention of the general public, a great example being the poor treatment of orphans highlighted in 'Oliver Twist'. Dickens also wanted to highlight he felt society faced and the attitudes of Victorian society which needed to be addressed. ...read more.

the context Dickens has used it, within the metaphor, it further enhances the image created in the mind of the reader, it creates an image of a malnourished, underweight child, who appears to be 'wasting away'. Dickens portrays Pip in a manner similar to an endangered animal; Pip has curled himself into a ball, as if a defence mechanism in order to shield himself from the imposing environment in which he finds himself. The use of this mouse-like, compact animal imagery is effective as it allows the reader to understand just how vulnerable Pip is as he has reverted to instinctive animalistic protective behaviour; this allows the reader to see just how endangered, under threat and exposed Pip feels. Further to this, Dickens portrays the relationship between Mrs Joe Gargery (Pip's older sister) and Pip, within this quote Dickens writes "... growing afraid of afraid of it all and beginning to cry was Pip." as a reader, you wonder why such a small boy is isolated, afraid and crying. In today's society, we wonder why no guardian is present to comfort the child, or why he has been left on his own vulnerable and afraid. This quote shows the lack of care shown towards Pip by his older sister; as a result of this, the reader is able to further empathise with Pip, this is essential especially at this early stage of the novel to build the foundations on which the readers feeling toward Pip will develop. Moreover, within this quote, Dickens effectively shows the negative attitude and lack of interest shown towards orphans not only by society in the Victorian era; not only was there a negative attitude from society but also by the guardian of the orphan, in many cases the child was seen as a burden, to be seen and not heard, a large degree of neglect was also shown towards orphans, unfortunately many were left without a home and those within orphanages were treated just a harshly, with discipline coming in the form of violent beatings, and often lived in terrible conditions. ...read more.

Pip cannot understand how Magwitch knows the details concerning his income, and cannot come to terms that it is a stranger, a convict, who he has just met (having no idea it is actually Magwitch) knows these details. It causes Pip severe anxiety to the point where he has to steady himself on his chair, as Pip begins to realise, this convict is indeed his benefactor. Pip is bewildered, if the news was to spread, he would no longer be accepted by his peers, and no longer be regarded as a gentleman; further to this, following the rude reception he had given to this man, the convict could easily remove his financial support. Magwitch is now once again in the position of power by the end of chapter thirty-nine, once Pip had uncovered the truth, finding that, the convict was Magwitch, and his benefactor. To conclude, Dickens conveys a range of messages to the reader through both Pip and Magwitch. Dickens expresses views on society - he manages to challenge the stereotypes of the different classes in society and how people conform or do not conform to the stereotypes placed upon them. Dickens shows through Pip the judgemental attitude of the upper classes that were deemed superior and more respectable to those of lower class. Yet Pip's behaviour in chapter thirty-nine would be deemed disrespectful by the reader; further to this, the reader would have seen Magwitch's polite, caring and generous behaviour towards Pip as more acceptable than the behaviour of Pip the "gentleman". Magwitch who is also a convict, conforms to the stereotype of a criminal in chapter one, however in chapter thirty nine, Magwitch is portrayed as loving, caring and selfless, thus breaking the stereotype and also showing that people should not be judged as they have the potential to change ion future. Dickens also shows that it is possible to work your way up through the social class system - however this elevation through the system may not necessarily improve the person's character for the better. ?? ?? ?? ?? ...read more.