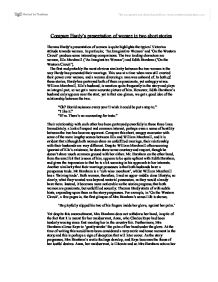 Compare Hardy's presentation of women in two short stories Thomas Hardy's presentation of women is quite highlights the typical Victorian attitude towards women . In particular, 'An Imaginative Women' and 'On the Western Circuit' produce some interesting comparisons. The two leading characters are women, Ella Marchmill ('An Imaginative Woman') and Edith Harnham ('On the Western Circuit'). The first and probably the most obvious similarity between the two women is the way Hardy has presented their marriage. This was at a time when men still exerted their power over women, and a woman divorcing a man was unheard of. In both of these stories, Hardy has portrayed both of them as passionate, yet unhappy wives. William Marchmill, Ella's husband, is mention quite frequently in the story and plays an integral part, so we get a more accurate picture of him. However, Edith Harnham's husband only appears near the start, yet in that one glance, we get a good idea of the relationship between the two. "Oh? Horrid nuisance every year! I wish it could be put a stop to." "I like it." ...read more.

The consequences of the act of deception became severe when Anna became pregnant with Raye's child. Still though, her infatuation with Raye continues; "I wish his child was mine-I wish it was! Yet how can I say such a wicked thing." Eventually, Raye and Anna end up married, with Raye only finding out the truth when it is too late. A man of Raye's integrity and position was expected to marry a woman of similar status, not an 'illiterate peasant', so the marriage would have been very damaging to Raye's reputation and social position, and as a result, the final act of deception had been carried out and Mrs Harnham and seen it out to the bitter end. Ella Marchmill, the protagonist in 'An Imaginative Woman', is also sexually unfulfilled by her husband William Marchmill. Due to his prosperous job in the gun trade, he is away for much of the time, and Ella ends up with an infatuation for a poet, Robert Trewe. Ella is described as having a lack of maternal instinct, which becomes evident within the first page. She is walking on the beach with her children 'considerably far ahead with the nurse'. ...read more.

Mrs Harnham also felt similar regret, as if she told the truth from the very beginning, she may have found happiness. Ella later goes onto die from childbirth in what can only be assumed as unhappy circumstances. Both women in the stories felt a high level of guilt for their dishonesty, with Ella even admitting to her husband that she was 'wicked', whilst Mrs Harnham broke down into tears. Despite the evidence that both women feel responsible and guilty for their crimes, it still doesn't give them the extra bit of integrity needed for the reader to feel sympathetic towards them. The weak relationship between husband and wife in both stories, builds up a certain degree of sympathy for the female protagonists; however, any respect that the reader may have held for them[, would most likely have vanished after their web of deceit and deception. Neither stories produce a clear-cut villain or heroine and despite the quite depressing ending, sympathy is more likely to be given to the potential lovers. The moral of the two stories is that deception, whether intended or not, inevitably leads to unhappiness for all concerned. ?? ?? ?? ?? ...read more.