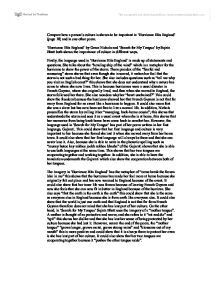 Compare how a persons culture is shown to be important in Hurricane Hits England and in one other poem.

Compare how a person's culture is shown to be important in 'Hurricane Hits England' (page 18) and in one other poem. 'Hurricane Hits England' by Grace Nichols and 'Search for My Tongue' by Sujata Bhatt both shows the importance of culture in different ways. Firstly, the language used in 'Hurricane Hits England' is made up of statements and questions. She talks about the "howling ship of the wind" which is a metaphor for the hurricane to show the power of the storm. There paradox of the "fearful and reassuring" storm shows that even though she is scared, it makes her feel that the storm is not such a bad thing for her. She also includes questions such as "tell me why you visit an English coast?" this shows that she does not understand why a nature has come to where she now lives. This is because hurricanes were a usual disaster in French Guyana, where she originally lived, and then when she moved to England, the storm followed her there. ...read more.

The imagery in 'Hurricane Hits England' has the metaphor of "come break the frozen lake in me" this shows that the hurricane has made her feel more at home because she originally felt out place and has now warmed to England because of the event. It could also show that her inner life was frozen because of leaving French Guyana and now she feels that she can now fit in better in England because of the hurrican. She also says "that the earth is the earth is the earth" this could show that she is the same as everyone else in England because she is from earth like everyone else. It could also show that the world is just one earth and that England is not that far from French Guyana therefore does not mind that she has lost part of her culture. On the other hand, in 'Search for My Tongue' Sujata Bhatt uses the imagery of a "mother tongue". ...read more.

The tone of 'Hurricane Hits England' is throughout very reassuring to her and positive about the storm hitting England because it brought back memories to her. She becomes more certain about her culture because she is "aligning myself to you" which shows that she knows who she is and is not afraid of losing he culture because it will certainly come back. However, 'Search for My Tongue' begins with a quite violent, negative tone by saying that a "foreign tongue" will cause "your mother tongue to rot, rot and die". However the tone does change to a more positive content tone by saying that it "blossoms out of my mouth". This shows that she is happy that she knows that she cannot lose her mother tongue. Both poems convey the importance of culture in different ways; 'Hurricane Hits England' shows that Grace Nichols' does not mind losing her culture because there is only one earth whereas in 'Search for My Tongue', Sujata Bhatt does not want to lose her culture but is relieved to find out that it will always be there with her. ...read more.

This response is extremely well-focused on the question proposed. The candidate addresses a wide variety of different features of the two poems and how they present the idea of culture being an important poets' identity. There are points backed up ...

This response is extremely well-focused on the question proposed. The candidate addresses a wide variety of different features of the two poems and how they present the idea of culture being an important poets' identity. There are points backed up excellently with an appropriate handling of quotes from both poems in equal proportion (one thing many candidates fall for, is to discuss one poem in great detail and the other in far lesser due to time constraints, but this is not an equal comparison and can lower their grade). The comparison poem this candidate has chosen is Sujatta Bhatt's 'Search For My Tongue', an excellent choice as they are both written from the view of someone who has had to move away from their homeland and misses their original culture.

The Level of Analysis is very good. There is a clear established understanding of the theme explored in the poems and how they adapt themselves in structure, language and imagery in order to convey the importance of culture. In their comments, the candidates uses a wide variety of field-specific terminology ("free verse", "stanza"). There is also a sound appreciation of the context of both Nichols and Bhatt and how they feel in response to their culture and moving away from their homeland. Contextual appreciation is very important GCSE level as it shows the canduidates ability to conduct external research into the authorial intentions of the poets and the social and historical factors that influenced the writing of the poems.

The Quality of Written Communication is very good. Only small errors which would very unlikely cause examiners to deduct marks are made as the effort in writing is evident, as is the candidate awareness of the poems. The small spelling mistakes do not compromise the strength of the answer.