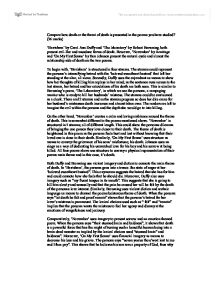 Compare how death or the threat of death is presented in the poems you have studied?

Compare how death or the threat of death is presented in the poems you have studied? (36 marks) 'Havisham' by Carol Ann Duffy and 'The laboratory' by Robert Browning, both present evil-like and mundane forms of death. However, 'November' by Armitage and 'On My First Sonne' by Ben Johnson present the natural cycle and almost the relationship side of death on the two poems. To begin with, 'Havisham' is structured in four stanzas. The stanzas could represent the persona's intensifying hatred with the 'beloved sweetheart bastard' that left her standing at the altar, all alone. Secondly, Duffy uses the enjambant as means to show how her thoughts of killing him replays in her mind; as the sentence runs across to the last stanza, her hatred and her calculations of his death are both seen. ...read more.

Similarly, 'On My First Sonne' uses structure as means to convey the grievance of his sons' misfortune; his death. Johnson uses an elegy as a way of dedicating his unmatched love for his boy and his sorrow at being killed. All four poems above use structure to convey a physical representation of their poems main theme and in this case, it's death. Both Duffy and Browning use violent imagery and diction to connote the main theme of death. In 'Havisham', the persona goes into a trance like state of anger at her 'beloved sweetheart bastard". This oxymoron suggests the hatred that she has for him and could connote how she feels that he should die. Moreover, Duffy also uses imagery such as "my fluent tongue in its mouth". ...read more.

Moreover, 'On My First Sonne' uses financial imagery as means to decrease his loss and his grieve. The persona says "seven yeeres thou'wert lent to me and I thee pay". This shows that he believes his son was a property of God, thus why he should stop crying. This is somewhat different to the other poems as death is seen as a vengeful and an evil might whereas in 'On My First Sonne', Johnson shows that death is just part of nature and not something we should be angry about. To conclude, death is presented as a force by all four poets. Nevertheless, Johnson took an interesting approach and he knew that death is a natural thing, therefore he knows his boundary. The poem I found most effective is laboratory as it's no narrative and the persona's views on death is seen first handily through the lexical choices and through language and structural devices. ...read more.