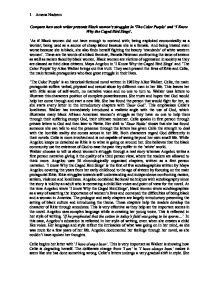 Compare how each writer presents Black women's struggles in 'The Color Purple' and 'I Know Why the Caged Bird Sings'.

Compare how each writer presents Black women's struggles in 'The Color Purple' and 'I Know Why the Caged Bird Sings'. 'As if Black women did not have enough to contend with; being exploited economically as a worker; being used as a source of cheap labour because she is a female. And being treated even worse because she is black, she also finds herself fighting the beauty 'standards' of white western women'. These are the words of a black feminist, Pamela Newman confronting the issue of sexism as well as racism faced by black women. Black women are victims of oppression in society as they are classed as third class citizens. Maya Angelou in 'I Know Why the Caged Bird Sings' and 'The Color Purple' by Alice Walker brings out this truth. They each present the lives of Ritie and Celie, the main female protagonists who face great struggle in their lives. 'The Color Purple' is an historical fictional novel written in 1982 by Alice Walker. Celie, the main protagonist suffers verbal, physical and sexual abuse by different men in her life. This leaves her with little sense of self-worth, no narrative voice and no one to turn to. Walker uses letters to illustrate this characters position of complete powerlessness. She trusts and hopes that God would help her come through and start a new life. She has found the person that would fight for her, so she starts every letter in the introductory chapters with 'Dear God'. ...read more.

This sense of displacement can be noticed in the first chapter where Ritie aged 3, and Bailey aged 4 are abandoned by their parents. The fact that Ritie has been constantly tossed back and forth creates a sense of not belonging anywhere. Angelou is successful in portraying Ritie's abandonment and her feeling of being ugly. Men in 'The Color Purple' are portrayed mainly as oppressors that add to female struggles. Walker portrays Alfonso as a child molester, a wife beater and an overall bad husband. 'He never had a kine wird to say to me. Just say you gonna do what your mammy wouldn't'. Through rapes and beatings, Celie is completely dominated by Pa. Walker is successful in making the readers believe this is a common reality for the black women in these times as she presents the readers with other women who endure the same assaults. Pa looked upon Celie as nothing more than an object for which he showed no affection or consideration. After going through the abuse from Pa, Celie made it her responsibility to protect her younger sister Nettie. 'I see him looking at my little sister. She scared. But I say I'll take care of you. With God help'. The lack of emotions is portrayed in the style of writing as Walker is dealing with this horrible state as a condition that she must endure. ...read more.

For the first time Ritie feels like she truly belongs and that someone belongs with her. She finally finds her space and happiness as a mother. Looking back at the past, the narrator is usually frightened, amused or sad. As the readers are shown emotions of anger, rage, irony and sometimes hysteria but as a narrator, Ritie is always upbeat, energetic and evaluating which all pays of at the end which becomes the beginning of a new life for Ritie. For 'The Color Purple', Walker uses the tone of sadness, which finally turns to anger and then shifts to happiness. The novel ends with Celie breaking away from all oppression and believing in herself. Neither the women characters nor the authors comment on the outrageous acts carried out by the black men. To a certain extent they accept and understand this oppression because of the culture and the time they grew up in. This adds to the struggle, as the oppression has become a way of life from which there is no escape. In both novels the female characters struggle to survive and find some respect comes through. These women don't blame the black men as they are united with them against the whites and their unreasonable attitudes. This is evident in both novels. In my opinion Walker is more successful in presenting the problems as she showed us how black women relied on God and each other as well as believing in themselves to face these problems. ...read more.