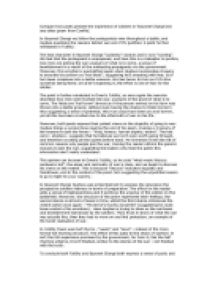 Compare how poets present the experience of soldiers in Bayonet Chargeand one other poem from Conflict.

Compare how poets present the experience of soldiers in 'Bayonet Charge'and one other poem from Conflict. In Bayonet Charge we follow the protagonists view throughout a battle, and Hughes questions the reasons behind war and if it's justified. A point further reinstated in Futility. The lead character in Bayonet Charge "suddenly" awakes and is now "running". We feel that the protagonist is unprepared, and here this is a metaphor to portray how men are joining the war unaware of what is to come, a sense of bewilderment in a result of the misleading propaganda via the government. Moreover, this emotion is exemplified again when Hughes incorporates imagery to describe his uniform as "hot khaki", suggesting he's sweating with fear, as if he's been misplaces into a battle scenario. ...read more.

The last word - etcetera - suggests that he believes war isn't even worth going through, and therefore crushing all the quotes before hand. He immerses it into the list of common reasons why people join the war, making the reader rethink the generic excuses to join the war, suggesting the leaders who feed the public this information don't really understand. This opinion can be seen in Owen's Futility, as he asks "what made fatuous sunbeams toil", the anger and animosity of war is clear, and we begin to discover his views on the matter. This is because "fatuous" indicates stupidity and foolishness, and in the context of the poem he's suggesting the unjustified reason to go to fight for your country. In Bayonet Charge Hughes uses emjambement to express the ignorance the prospective soldiers harness in terms of preparation. ...read more.

To conclude both Futility and Bayonet Charge both express a sense of panic and fear that the soldiers must have harnessed due to their ignorance of what is to come. Owen describes the narrator moving him "into the sun", this could suggest the truth the people need. The sun, a shining of light, a metaphor for the truth, and Owen suggests the soldiers should be told it as he "moves him into" it. They both also portray the "fatuous" involvement of the men going to war, as Hughes perfectly put it - "crawled in a threshing circle". The imagery used adds a revolting scene, and suggests pain and fear beyond expression. Here, Hughes uses a hyperbole to shock the reader into why anyone would want to go through that, just for "honour" and "human dignity" ...read more.