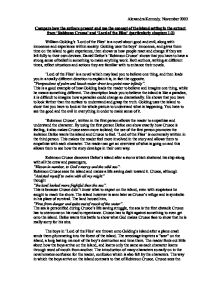 Compare how the authors present and use the concept of the island setting in the extract from 'Robinson Crusoe' and 'Lord of the Flies' (particularly chapters 1-3).

Alexandra Kennedy. November 2002 Compare how the authors present and use the concept of the island setting in the extract from 'Robinson Crusoe' and 'Lord of the Flies' (particularly chapters 1-3) William Golding's 'Lord of the Flies' is a novel about good and evil, along with innocence and experience within society. Golding uses the boys' innocence, and gives them time on the island to gain experience, then shows us how people react and change if they are left fully to their own devices. Daniel Defoe's 'Robinson Crusoe' shows that you have to have a strong sense of belief in something to make anything work. Both authors, writing at different times, reflect situations and actions they are familiar with to enhance their novels. 'Lord of the Flies' is a novel which may lead you to believe one thing, and then leads you in a totally different direction to explain it is, in fact the opposite. "Perspectives of palm and beach water drew to a point near infinity". This is a good example of how Golding leads the reader to believe and imagine one thing, while he means something different. The description leads you to believe the island is like a paradise, it is difficult to imagine how a paradise could change so dramatically. He shows that you have to look farther than the surface to understand and grasp the truth. Golding uses the island to show that you have to look at the whole picture to understand what is happening. You have to see the good and the evil in everything in order to make sense of it. 'Robinson Crusoe', written in the first person allows the reader to empathise and understand the character. By using the first person Defoe can show exactly how Crusoe is feeling, it also makes Crusoe seem more isolated; the use of the first person promotes the isolation Defoe wants the island and Crusoe to feel. ...read more.

Crusoe uses a practical destination for his camp rather than a lazy, fearless place, like the boys. The boys waste the few resources they have. When they set fire to the top of the island, they destroy the island in an act of laziness. The boys aren't committed to making their society work. Some of them are lazy and care about having fun more than being rescued. The hunters seem only interested in bringing food to show their strength and in attempt to belittle someone else. The boys seek pleasure at the beginning in having the power to punish rule breakers, "We'll have rules! Lots of rules! Then anyone who breaks them-" "Whee-oh" Here the only reason the boys seem to want to punish anyone is so they can have fun having authority. They don't seem bothered about the principle of rule breaking, or the problems it may cause. Island life was very different for the boys, than their previous lives. They have all been thrown together into a very bizarre situation. Stuck on an island, they had no civilising influences like teachers or parents. We can see this when the boys are throwing stones and destroying a perfectly adequate habitat. No one is there to control their actions, and it isn't surprising that later in the novel conflicts between different characters occur. Such an intense situation brings out people's inner feelings and instinctive behaviour. The boys' now primitive existence allows them to do whatever they want. They can be whoever they want to be. When the hunters dress themselves up and paint their faces, we see them create what they see as a license to kill. They disguise themselves with the face paints and become barbaric, using the disguise as an excuse for this. The boys show little remorse about brutally killing the animals on the island, whereas Crusoe feels bad about this act of survival. ...read more.