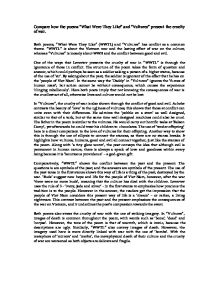 Compare how the poems What Were They Like and Vultures present the cruelty of war.

Compare how the poems "What Were They Like" and "Vultures" present the cruelty of war. Both poems, "What Were They Like" (WWTL) and "Vultures" has conflict as a common theme. "WWTL" is about the Vietnam war and the lasting effect of war on the culture, whereas "Vultures" is loosely about WWII and the conflict between good and evil. One of the ways that Levertov presents the cruelty of war in "WWTL" is through the ignorance of those in conflict. The structure of the poem takes the form of question and answer, which could perhaps be seen as a soldier asking a person of a higher status, because of the use of 'sir'. By asking about the past, the soldier is ignorant of the effect that he has on the 'people of Viet Nam'. ...read more.

He would carry out horrific tasks at 'Belson Camp', yet afterwards he could treat his children to chocolates. The use of 'tender offspring' here is a direct comparison to the love of vultures for their offspring. Another way to show this is through the use of ellipsis to connect the stanzas, as there are no stanza breaks. It highlights how vultures, humans, good and evil all connect together, just like the stanzas of the poem. Along with 'a tiny glow worm', the poet conveys the idea that although evil is permanent in human nature, there is always a speck of love and goodness within every being because it is 'bounteous providence' - a god-given gift. Comparatively, "WWTL" shows the conflict between the past and the present. ...read more.

Both poems also stress the cruelty of war with the use of striking imagery. In "Vultures", images of death is common throughout the poem, with words such as 'bone', 'dead' and 'corpse'. However, the tone of the poem is that of warmth, which is ironic, because the descriptions are ugly. Similarly, "WWTL" also convey images of death. However, the imagery used here is more directly linked with war with the use of 'bombs'. With the metaphors of 'mirrors' and 'moths', the metaphysical death of their culture and the cruelty of war are worsened as both objects are delicate and fragile. In summary, both poems uses many different techniques in presenting the cruelty of war. Through these two poems, I feel that even though the context of each poem is different, the cruelty of war presented in both poems is the same no matter what or where you are. ...read more.

One of the aspects of the answer which the candidate has done well is focusing around the question. This is clearly done by referencing the cruelty of war at the start of every paragraph, to show the examiner that the ...

One of the aspects of the answer which the candidate has done well is focusing around the question. This is clearly done by referencing the cruelty of war at the start of every paragraph, to show the examiner that the student knows exactly what is being asked and structuring their answer around it. The candidate also compares well; when they make a point they always make a direct comparison across the texts to link the ideas, as well as involving attitudes in their comments, for example "soldier is ignorant...'Daddy'.. would be lost" in the second paragrapn.

The essay is limited and held back by it's lack of expected terminology. Only a couple of terms are used (ellipsis, imagery, rule of 3- try to write numbers out in essays- etc), and by using them related to quotes (for example, labelling the 'a tiny glow worm' a metaphor would complete the point, and make it easier to discuss the effect this has. The comments on effect and attitude are developed well and clearly across both poems, and are usually linked back to the question again. Short, snappy quotes are used frequently, which show an expanse of understanding about the texts and proves to the examiner that the candidate does know what he/she is talking about. The short introduction and conclusion begin and end a well structured essay and make a general summary about the presentation of cruelty in war in both poems, as well as a personal interpretation.

The grammar and spelling are mostly correct throughout the essay, except a few small instances, including the last sentence of the second paragraph, which is quite confusing and muddles the point. The essay could be longer, and more points could be made or developed further to make sure all areas of structure and language are covered, but time constraints in exam condiitions may limit this.