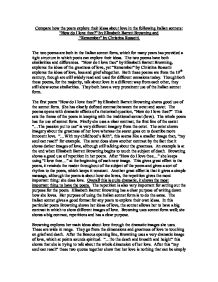 Compare how the poets explore their ideas about love in the following Italian sonnets: &quot;How do I love thee?&quot; by Elizabeth Barrett Browning and &quot;Remember&quot; by Christina Rossetti.

Compare how the poets explore their ideas about love in the following Italian sonnets: "How do I love thee?" by Elizabeth Barrett Browning and "Remember" by Christina Rossetti. The two poems are both in the Italian sonnet form, which for many years has provided a tight structure in which poets can explore their ideas. The two poems have both similarities and differences. "How do I love thee" by Elizabeth Barrett Browning, explores the ideas of the greatness of love, yet "Remember" by Christina Rossetti explores the ideas of love, loss and grief altogether. Both these poems are from the 19th century, though are still widely read and used for different occasions today. Though both these poems, for the majority, talk about love in a different way from each other, they still show some similarities. They both have a very prominent use of the Italian sonnet form. The first poem "How do I love thee?" by Elizabeth Barrett Browning shares good use of the sonnet form. She has clearly defined contrast between the octet and sestet. The poems opens with dramatic effects of a rhetorical question, "How do I love thee?" ...read more.

A very big contrast in the way love is addressed is the poem "Remember" by Christina Rossetti. This poem is similar to "How do I love thee?" in some aspects though there are clear differences especially with the idea of love. It has a similar use of an obvious change and contrast between the octet and sestet. The title word of this poem is repeated several times, which gives a dramatic feel. This repetition gives the reader a clear point to remember something giving the idea that something will soon be lost. The repetition gives a very different idea of love to the other poem, "How do I love thee?", where it keeps trying to convince something of the writers feeling. Whereas, Rossetti gives the idea that, rather convincing the reader of her feeling, she wants the reader to feel. The octet of "Remember" really is very commanding the reader to remember as it opens with "Remember me when I am gone away". This is very dramatic and gives a whole subdued feeling to the octet as a euphemism of death. "Remember me" is repeated three times in the octet, which gives an effect of almost forcing upon the reader. ...read more.

is "let me count the ways", which is simply making a statement. Both of these sorts of phrases of the poems are used to give an effect. They give big contrasts to all the many dramatic images that are used in the poems. These lines give the effect of simplicity and give the reader a feel of the poet really wanting to get a point across. In this way and other language used in the poems are quite similar. They both want to get their point across, which are their ideas of love. In conclusion, both poets show they have a great passion for love. They believe in it as a deep human experience. They both have very different ideas and ways of exploring them in their Italian sonnets. They use form to its full effect including dramatic images and big contrasts between the octet and sestet. Browning talks of the scale of her love using the sonnet in a positive way. Rossetti talks of remembering and a more subdued kind of love. The one thing that differs very much in these poems is the way the subject of love and death is addressed. Browning explores the idea that love can be strengthened after death, whereas Rossetti has the idea that love can only carry on through remembering love that has been. ...read more.