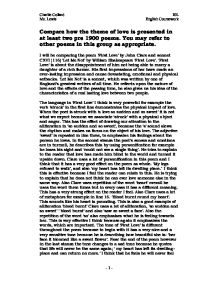 Compare how the theme of love is presented in at least two pre 1900 poems. You may refer to other poems in this group as appropriate.

Compare how the theme of love is presented in at least two pre 1900 poems. You may refer to other poems in this group as appropriate. I will be comparing the poem 'First Love' by John Clare and sonnet CXVI (116) 'Let Me Not' by William Shakespeare 'First Love'. 'First Love' is about the disappointment of him not being able to marry a daughter of a rich farmer. His first impressions of her have made an ever-lasting impression and cause devastating, emotional and physical setbacks. 'Let Me Not' is a sonnet, which was written by one of England's greatest writers of all time. He reflects upon the nature of love and the effects of the passing time, he also gives us his idea of the characteristics of a real lasting love between two people. The language in 'First Love' I think is very powerful for example the verb 'struck' in the first line demonstrates the physical impact of love. When the poet is struck with 'a love so sudden and so sweet' it is not what we expect because we associate 'struck' with a physical object and anger. This has the effect of drawing our attention to the alliteration in 'so sudden and so sweet', because the 's' sound slows the rhythm and makes us focus on the object of his love. ...read more.

Near the end of the poem however in the last stanza the tone changes to a sad tone because he quotes that life will never be the same again; ' my heart has left its dwelling-place and can return no more.' I think that he feels he will never feel the same way about another human being as he did for her because he has just experienced the most powerful emotion of all, love, for the first time. I think that this change of tone is very powerful because it is like relationships, it has the up points but also Clare illustrates the down points and this in the tone of his poem. The tone of ''Let Me Not'' is very serious because Shakespeare is trying to define the concept of love. To begin with the tone of this sonnet is quite serious. Shakespeare is trying to get the message across that love is a very strong everlasting feeling that cannot be destroyed by anyone or anything; ' love is not love/which alters when alteration findes.' I think the tone of this sonnet is very important in how Shakespeare gets his message across because of the seriousness of it. ...read more.

This is very effective I think because love is unpredictable and it can change instantly just like this sonnet. So the natural change is the change of topic. In Line 8 ' Whose worths unknowne, although his hight be taken' this means that a star's height can be estimated but you cannot judge its power to guide and direct people's lives. In other words the star's power is inestimable. This is a metaphor of love, Shakespeare is saying that love is the star that guides the ships and you cannot judge its power to bring people closer together! In ''Let Me Not'' Shakespeare writes about how strong love is when it is true love. Shakespeare also expresses how love is unbreakable and eternal. Shakespeare has a very unique style of writing and is very selective when choosing his vocabulary. However 'First Love' is a very emotional and personal poem I feel that I can imagine what John Clare was going through. Personally I think that Shakespeare presented his theme of love in the best way because he uses several techniques. This is also because it has a wide variety of different uses of language. ?? ?? ?? ?? Charlie Collard 10L Ms. Lewis English Coursework - 1 - ...read more.