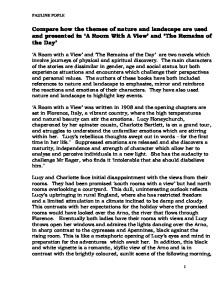 Compare how the themes of nature and landscape are used and presented in 'A Room With A View' and 'The Remains of the Day'.

Compare how the themes of nature and landscape are used and presented in 'A Room With A View' and 'The Remains of the Day' 'A Room with a View' and 'The Remains of the Day' are two novels which involve journeys of physical and spiritual discovery. The main characters of the stories are dissimilar in gender, age and social status but both experience situations and encounters which challenge their perspectives and personal values. The authors of these books have both included references to nature and landscape to emphasize, mirror and reinforce the reactions and emotions of their characters. They have also used nature and landscape to highlight key events. 'A Room with a View' was written in 1908 and the opening chapters are set in Florence, Italy, a vibrant country, where the high temperatures and natural beauty can stir the emotions. Lucy Honeychurch, chaperoned by her spinster cousin, Charlotte Bartlett, is on a grand tour, and struggles to understand the unfamiliar emotions which are stirring within her. 'Lucy's rebellious thoughts swept out in words - for the first time in her life.' Suppressed emotions are released and she discovers a maturity, independence and strength of character which allow her to analyse and perceive individuals in a new light. She has the audacity to challenge Mr Eager, who finds it 'intolerable that she should disbelieve him.' Lucy and Charlotte face initial disappointment with the views from their rooms. They had been promised 'south rooms with a view' but had north rooms overlooking a courtyard. This dull, uninteresting outlook reflects Lucy's upbringing in rural England, where she has restricted freedom and a limited stimulation in a climate inclined to be damp and cloudy. This contrasts with her expectations for the holiday where the promised rooms would have looked over the Arno, the river that flows through Florence. Eventually both ladies have their rooms with views and Lucy throws open her windows and admires the lights dancing over the Arno, in sharp contrast to the cypresses and Apennines, black against the rising room. ...read more.

As a child, the pond would have appeared to be a lake and much larger than it actually was and a 'sacred' object is something revered and protected. The reader first encounters the Sacred Lake when Lucy and Cecil chance upon the pool set amongst the pines - 'another tiny green alp, solitary this time' a reference back to the Italian alps where Lucy had received her first, spontaneous and disturbing kiss from George. Lucy now receives her first kiss from Cecil which is clumsy and ridiculous and considered to be a 'failure' by Cecil. Ironically, Cecil considers that passion should be 'irresistible, it should never ask for leave where there is a right of way', that 'women revere men for their manliness', which describes George Emerson's actions in Italy. When Cecil and Lucy are at the Sacred Lake it is 'only a puddle', fed by a stream which can swell after heavy rain, transforming the pool into something 'quite large and beautiful'. In this state, the pool is indicative of the love and relationship of Cecil and Lucy, insignificant and lacking the force to make it a large and beautiful experience for them both, accentuated even more by the dismal failure of the kiss. When Lucy returns to the pond it has been transformed to its flooded magnificence and is bursting with life and vitality. It has become a 'momentary chalice for youth' as George, Freddy and Mr Beebe throw off their clothes and swim and play in the pool. Initially, George had been indifferent, standing 'Michelangelesque on the flooded margin', a literary reference back to the sculptures of Italy, which provides the reader with a very clear image. Suddenly the bank gives way, tipping him into the water before he has 'weighed the question properly', similar to the way people are sometimes described as falling in love, helplessly and suddenly, without careful consideration. ...read more.

After George kisses Lucy in the idyllic Italian landscape, the returning party are warned of the 'swift approach of bad weather' and the 'rain and darkness' arrive together. This echoes the pessimistic consequences of the kiss, as predicted by Charlotte Bartlett and the exact feelings of Lucy at that time as she struggles to understand her emotions and the actions of George. The whole group are unprepared for the vehemence of the storm and the tension increases. The fear is compounded as an overhead line crashed down, barely missing the carriages, causing more distress and turmoil within the party and also Lucy, as Charlotte discusses the repercussions of the kiss, witnessed by the cab driver who 'saw it all.' 'I want not to be muddled' says an exhausted Lucy as she and Charlotte continue a battle of wills inside as the elements battle outside. The stormy weather continues in England when Lucy breaks off her engagement to Cecil and announces her intention to go to Greece. Her actions receive a mixed reception and just as the 'summer was retreating' and the weather 'breaking up', the atmosphere at Windy Corner becomes dismal and unsettled. Mr Beebe predicts that 'we shall have darkness' a reflection of his reaction to Lucy's proposals, 'I can't explain - it's wrong.' Mrs Honeychurch battles in the garden but 'It gets too dark', as she endeavours to sort out the havoc in her flower beds and tries to understand why 'Lucy wants to go to Greece. I don't know what the world's coming to.' She needs light to see what is happening but there is none - physically or metaphorically. Lucy and her mother return from a shopping trip in the pouring rain and have an argument which leaves them both feeling much like the weather, miserable and dejected. Raindrops drip like tear drops onto their carriage from the trees as the rain stops, enabling them to stop and put the hood down, resulting in the discovery that the Emersons have left Cissie Villa. ...read more.