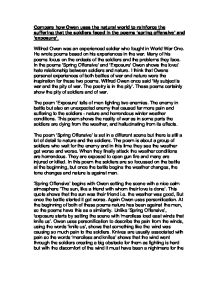 Compare how Owen uses the natural world to reinforce the suffering that the soldiers faced in the poems 'spring offensive' and 'exposure'. Wilfred Owen was an experienced soldier who fought in World War One. He wrote poems based on his experiences in the war. Many of his poems focus on the ordeals of the soldiers and the problems they face. In the poems 'Spring Offensive' and 'Exposure' Owen shows the love/ hate relationship between soldiers and nature. I think that Owens personal experiences of both battles of war and nature were the inspiration for these two poems. Wilfred Owen once said 'My subject is war and the pity of war. The poetry is in the pity'. These poems certainly show the pity of soldiers and of war. The poem 'Exposure' tells of men fighting two enemies. The enemy in battle but also an unexpected enemy that caused far more pain and suffering to the soldiers - nature and horrendous winter weather conditions. This poem shows the reality of war as in some parts the soldiers are dying from the weather, and hallucinating from its effects. The poem 'Spring Offensive' is set in a different scene but there is still a lot of detail to nature and the soldiers. The poem is about a group of soldiers who wait for the enemy and in this time they see the weather get worse and worse. ...read more.

I think that Owen may well have thought of doing this as he talks with so much hatred about the weather and in the poem he describes that it has come to the worst it can get (snow) you feel that he may well of thought of throwing in the towel and ending this nightmare. The tone in 'Spring Offensive is similar to 'Exposure' by starting with a peaceful and calm and constant tone in the first stanza. Some words help to continue this tone; May breeze; summer oozed into their veins. These help to keep the tone calm and also describe nature and set the scene. Also from a readers point of view you can see that the weather is fine and perfectly normal at this stage very unlike the poem 'Exposure'. It's not until the third stanza that fighting and bad weather appear. There is a sudden change in tone which makes the reader more alert and ready for something to happen. The last words of the second stanza are 'they breathe like trees unstirred' this quote is describing the soldiers in a very calm way, it shows that everything is quiet and tranquil. This therefore makes it easy for Owen to change the pace because it was so relaxed beforehand. Also in the quote it says that the soldiers are sleeping; as well as the reader, the quick change between pace could have affected the soldiers because they may not have expected it but all of a sudden they were under attack. ...read more.

All that is left is war and pointless fights. Similarly, in 'Exposure' the quote 'for love of god seems dying' shows that the soldiers are being tortured so much that they have lost faith in god. This leads to the religious theme of evil and suffering were many religious groups ask why god has let this kind of torture happen to so many good people. In this case Owen is explaining the sense of loss among the soldiers, like a final prayer before death because of the negativity of the soldiers that have fought on for days and nights enduring so much pain, feeling that they have mentally come to an end. Wilfred Owen had a deep and abiding sympathy for his fellow soldiers. I think that his poems speak on behalf of his fellow soldiers as well as his own personnel encounter. Whilst his own undisputed courage in action gave him the moral authority to denounce the war. Both "Exposure" and "Spring Offensive" narrate the truth behind the soldiers, they both relate to the experiences faced by the armed forces and both enforce the explicit details of the weather and of the fighting that haunted the poet's life. His progressions after his meetings with death and war are enhanced with a more meaningful approach. Beginning to question life in itself; both "Exposure" and "Spring Offensive" represent his desperation and solid lack of hope. Owen himself appears beyond help; his faith lost. ...read more.