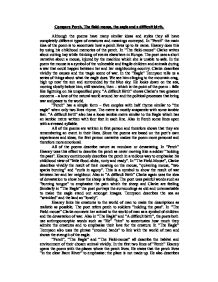 Compare Perch, The Field-Mouse, The Eagle, and A Difficult Birth.

Compare Perch, The field-mouse, the eagle and a difficult birth. Although the poems have many similar ideas and styles they all have completely different types of creatures and meanings conveyed. In "Perch" the main idea of the poem is to accentuate how a perch lives up to its name. Heaney does this by using his childhood memories of the perch. In "The field-mouse" Clarke writes about cutting hay while thinking of events elsewhere in Europe. The poet uses a short narrative about a mouse, injured by the machine which she is unable to safe. In the poem the mouse is a symbol of the vulnerable and fragile children and animals during a war that could happen between her and her neighbouring country. Clarke describes vividly the causes and the tragic scene of war. In the "Eagle" Tennyson tells us a series of things about what the eagle does. We see him clinging to the mountain crag, high up near the sun and surrounded by the blue sky. He looks down on the sea, moving slowly below him, still watches, then - which is the point of the poem - falls like lightning on his unspecified prey. ...read more.

In "The Field-Mouse", Clarke describes vividly the result of their mowing on the mouse, "quivering mouse, "two sparks burning" and "curls in agony". This is a symbol to show the result of war between her and her neighbour. Also in "A difficult Birth" Clarke again uses the idea of devastation to show how the sheep is feeling. The poet uses painful words such as "burning tongue" to emphasise the pain which the sheep and Clarke are feeling. Similarly in "The Eagle" the poet portrays the surroundings as old and unremarkable to make the eagle stand out amongst images. Tennyson describes the sea as "wrinkled" and the land as "lonely". Heaney links his creatures to the world of man to make the descriptions as realistic as possible. The poet refers perch to soldiers "holding the pass". In "The Field-mouse" Clarke connects her animal to the world of man as a symbol of children and the devastation of war. Also in "The Eagle" and "A difficult birth", the poets both use anthropomorphic words such as "He" "him" to accentuates how much they admire the creatures and to emphasise their love for the creature. ...read more.

However in "A difficult birth" Clarke doesn't describe the habitat or the environment because the most important idea in the poem is the giving of birth and the sheep and Clarke's feelings. Unlike the other poems the environment is not needed to bring the animal to life or motion. Clarke and Heaney have used unremarkable creatures: a lamb, a perch and a mouse, however they elevated them through their poems to give certain meanings. In "Perch" Heaney uses it to say that the perch may seem tedious and never moving from his childhood point of view but he sees it now from the animal's perspective "under the water-roof". The poet tries to show that the perch actually wants to escape the water and see what actually "flows and (the) steady go of the world". However Tennyson uses a magnificent creature to show his spirit and ideas. Overall, I prefer "the field-mouse" more than the other poems because of the wide range of poetic techniques used especially symbolism to create a moving narrative of the mouse and also the pessimism of an ordinary war/battle. Unlike the other poems Clarke also connects her poem with the real world, as the newspapers in the poem represent the events elsewhere in Europe. ...read more.