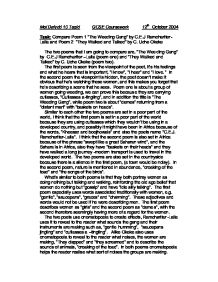 Moi Dafydd 10 Tegid GCSE Coursework 12th October 2004 Task: Compare Poem 1 "The Weeding Gang" by C.E.J Ramchariter-Lalla and Poem 2 "They Walked and Talked" by C. Uche Okeke The two poems that I am going to compare are, "The Weeding Gang" by C.E.J Ramchariter -Lalla (poem one) and "They Walked and Talked" by C. Uche Okeke (poem two). The first poem is seen from the viewpoint of the poet, it's his feelings and what he hears that is important, "I know", "I hear" and "I love." In the second poem the viewpoint is hidden, the poet doesn't make it obvious that he's watching these women, and this makes you forget that he's describing a scene that he sees. Poem one is about a group of women going weeding, we can prove this because they are carrying cutlasses, "Cutlasses a-tingling", and in addition the title is "The Weeding Gang", while poem two is about "dames" returning from a "distant mart" with "baskets on heads". Similar to each other the two poems are set in a poor part of the world, I think that the first ...read more.

These adjectives and words would not be used if he were describing men. The first poem describes women as "girls" and the second poem as "dames", with the second therefore seemingly having more of a regard for the women. The two poets use onomatopoeia to create effects, Ramcharitar-Lalla uses it to reveal to the reader what sounds the gang and their instruments are making such as, "gentle humming", "saucepans jingling" and "cutlasses a -tingling". Alike Okeke also uses onomatopoeia to reveal to the reader what noises, the women are making, "They clapped" and "they screamed" and to describe the sounds of animals, "croaking of the toad". In both poems onomatopoeia helps the reader realise what sort of noises the groups are making. The first poem is in the present tense while the second is in the past tense. The first poem has rhyme patterns and a musical rhythm, (the rhyme pattern is A, A, B, C, C, B) in contrast the second poem is in free verse. ...read more.

" songs of birds" but nature is used to describe to the reader how loud the women are, " Not even the discordant croaking of the toad ... were heard above the noise of these homing folk". Both poets use every day language that most people can understand, "And also ease their walking" and "along the winding beaten tracks". The first poem has two words that don't belong to the English language "Kheesaz and boojhowals"- these words might belong to African culture. Both poets have a positive attitude towards the groups of women. And both use phrases like, " I love to hear their charming melodies." Although both poets admire the groups of women, C. Ucke Okeke criticises the women a few times, e.g. "wagging tongues". My favourite poem is "The Weeding Gang" because of the regular rhyme and the musical rhythm. I also like the use of onomatopoeia to describe the sounds of the women, "cutlasses a-jingling". The poem also makes me feel happy because the happiness of the women rubs off on me. Although I preferred poem one, I did enjoy reading poem two. ...read more.