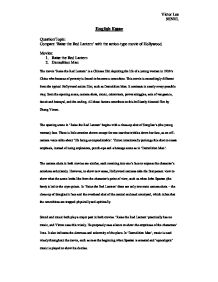 Compare 'Raise the Red Lantern' with the action-type movie of Hollywood.

Sound and music both play a major part in both movies. 'Raise the Red Lantern' practically has no music, and Yimou uses this wisely. He purposely uses silence to show the emptiness of the characters' lives. It also indicates the slowness and solemnity of the place. In 'Demolition Man', music is used wisely throughout the movie, such as near the beginning when Spartan is arrested and 'apocalyptic' music is played to show his demise. The colour in 'Raise the Red Lantern' is usually monotonous, except for the red lanterns that contrast to show where love is or will be made. This is similar to 'Demolition Man' (without the lanterns), when Spartan and his partner, Lenina Huxley decide to make love. ...read more.

The endings in both movies are somewhat similar with happiness playing a part by the wedding of the fifth mistress, and by Spartan annihilating Phoenix and finishing up with a long passionate kiss with Huxley. However, Yimou's finale provokes thought as you see Songlian demented and walking aimlessly about in the courtyard, while the fifth mistress is another victim of the Master's wrath. In conclusion, 'Raise the Red Lantern' and 'Demolition Man' differ in many ways from the opening scene, camera shots, music, colour, power struggles, deceit and the ending. Both movies have completely different storylines, thus the discrepancy of director's choices. The only critical attribute is that Hollywood films seem to flow on, whereas in 'Raise the Red Lantern' you are made to cogitate about the situation. Victor Lee 9ENVL ...read more.