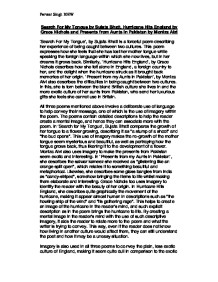 Compare Search For My Tongue by Sujata Bhatt, Hurricane Hits England by Grace Nichols and Presents from Aunts in Pakistan by Moniza Alzi.

Search For My Tongue by Sujata Bhatt, Hurricane Hits England by Grace Nichols and Presents from Aunts in Pakistan by Moniza Alzi 'Search For My Tongue', by Sujata Bhatt is a forceful poem describing her experience of being caught between two cultures. This poem expresses how she feels that she has lost her mother tongue while speaking the foreign language within which she now lives, but in her dreams it grows back. Similarly, 'Hurricane Hits England', by Grace Nichols describes how she felt alone in England, a foreign country to her, and the delight when the hurricane struck as it brought back memories of her origin. 'Present from my Aunts in Pakistan', by Moniza Alvi also describes the difficulties in being caught between two cultures. In this, she is torn between the bland British culture she lives in and the more exotic culture of her aunts from Pakistan, who send her luxurious gifts she feels she cannot use in Britain. All three poems mentioned above involve a deliberate use of language to help convey their message, one of which is the use of imagery within the poem. The poems contain detailed descriptions to help the reader create a mental image, and hence they can associate more with the poem. ...read more.

The mental image of a tongue rotting in your mouth is quite a disturbing one, and this image is associated to England within the poem. This kind of negative imagery when in relation to England is also found in 'Presents from my Aunts in Pakistan', where the expensive and ornate presents from India are somehow dismissed by the dull and formal British culture. In this poem, the presence of something exotic from Pakistan is followed by the dismissing influence of England, for example the "candy-striped glass bangles" from Pakistan, "snapped" and "drew blood" once in England. Again, this is quite a disturbing and unsettling image that has been associated with England. In 'Hurricane Hits England', she is obviously very unhappy living in England, feeling a stranger to the cultures and traditions around her. The writer describes how the lake in her has been frozen by the sadness she's felt in England, and so she asks the hurricane to "come and break the frozen lake in me". The fact that "it took a hurricane, to bring her closer to the landscape" also implies the loneliness she feels in England, once more relating it to unsettling and discontented things. ...read more.

In this poem there is a direct contrast between her mother culture and western culture she finds herself torn between. The structure is line by line, with the first being Indian followed by the Western alternative. For example "The presents were radiant in my wardrobe" is followed by "My aunts requested cardigans from Marks and Spencers". This shows how the poem contrasts the two civilisations, by mixing the East with the West line by line. In Hurricane Hits England, the structure is also one of negative to positive. However in this poem, the reader does not realise that the poet is truly homesick until near the end of the poem, where she asks the hurricane "Come to break the frozen lake in me". It still ends positively because the poet comes to peace with her new surroundings due to the Hurricane. The three poems mentioned in this essay are all about being caught between two cultures, and the poets communicate this message in both different and similar ways. Each poem gives the reader a clearer understanding of how it might feel to be torn between two cultures, even if they have no actual experience of this. Therefore the poets have achieved their aim of expressing their emotions to the reader in a way that they can relate to and show how they are stuck between two cultures. Parveer Singh 10EW ...read more.