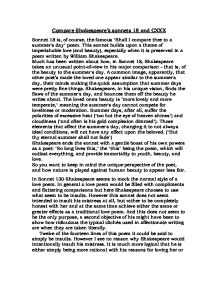 Compare Shakespeare's sonnets 18 and CXXX Sonnet 18 is, of course, the famous "Shall I compare thee to a summer's day" poem. This sonnet builds upon a theme of imperishable love (and beauty), especially when it is preserved in a poem written by William Shakespeare. Much has been written about how, in Sonnet 18, Shakespeare takes an unusual point-of-view in his major comparison - that is, of the beauty to the summer's day. A common image, apparently, that other poet's made the loved one appear similar to the summer's day, their minds making the quick assumption that summer days were pretty fine things. Shakespeare, in his unique vision, finds the flaws of the summer's day, and bounces them off the beauty he writes about. The loved one's beauty is "more lovely and more temperate," meaning the summer's day cannot compete for loveliness or moderation. Summer days, after all, suffer the polarities of excessive heat ("too hot the eye of heaven shines") ...read more.

And this does not seem to be the only purpose, a second objective of his might have been to show how ridiculous the typical clich�s used in affectionate writing are when they are taken literally. Twelve of the fourteen lines of this poem it could be said to simply be insults. However I see no reason why Shakespeare would intentionally insult his mistress. It is much more logical that he is either simply being more rational with his reasons for loving her or you could go so far as to say that he his intention is to not insult her at all by not patronizing her with exaggerated claims about her beauty. It would be foolish to believe that the breath of his mistress did smell like any type of perfume or that her voice was anything like music. So if Shakespeare had claimed that her breath was like perfume or her voice like music he would have been basically lying, something that could have angered his mistress more than what seem to be insults. ...read more.

In the same poem Shakespeare is able to prove two points. One is that a love poem does not need to be a lie for it to convey the same feelings of compassion and the second is that a normal love poem is made up of ridiculous comparisons that when looked at realistically make no sense. Which brings up a theme: irony. Both poems give us an unexpected conclusion, one that proves ironical in both cases. In both cases, of course, the poet maintains his love, which is the strongest element, not nature. And this is the strangeness of the poems. We generally think of the power of nature to overrule all. There is a theme of "unchanging love." But you might consider instead a theme closer to "all important love." Neither of these poems actually says that love will remain permanent. Sonnet 18 tells us that beauty will, and Sonnet 130 shows us that his love is strong even if the woman has flaws. But both poems demonstrate the sheer dominating power of love, a power even over Nature. And this is powerful indeed. ...read more.