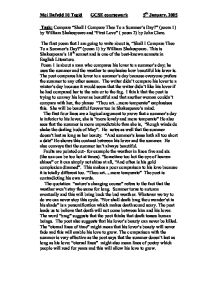 Compare &quot;Shall I Compare Thee To a Summer's Day?&quot; (poem 1) by William Shakespeare and &quot;First Love&quot; ( poem 2) by John Clare.

Shakespeare points out that his love for his lover will last as long as he lives. Shakespeare used a conventional form of poetry to praise poetry and his beloved by using the form of the sonnet. He boasted that both would be preserved nearly eternally. Five hundred years later, no one refutes his boast. **** The second poem that I am going to write about is "First Love" (poem 2) by John Clare. John Clare was born in Northamptonshire in 1793. He had little schooling and left school at the age of eleven, he was mainly self-taught. Many of his poems are about nature and the seasons. He first published his poetry in 1820, aged 21 and he was married in the same year to Martha Turner, although he was still in love with his first girlfriend, Mary Joyce. He was admitted to an asylum for the insane in 1837 and he escaped in 1841 looking for his first love, Mary Joyce - whom he believed to be his wife. He wrote the poem in 1841, but it gives no hint of the pressures he must have been under at the time. The poem is about a boy who falls in love with a girl, who doesn't realise it at first but does by the end. The title "First Love" is very appropriate as the poem is about someone's first love. ...read more.

His heart has been changed forever after finding his first love, and he feels the pain of unrequited love. His heart has moved to its new place and it will never return, "My heart has left its dwelling-place. And can return no more" The rhyming pattern is the same in every stanza - a,b,a,b,c,d,c,d. The rhythm of the poem also follows the same pattern. **** Both poems are similar in that they have been written to the lovers of the poets. Their main theme is love and how this has affected them. Both poets have used nature to compare with their lovers, Shakespeare has one long comparison, he compares his lover to a summer's day while John Clare uses individual comparisons to nature " Her face is bloomed like a sweet flower" John Clare uses a more modern vocabulary than Shakespeare but this is expected as Clare wrote two centuries later than Shakespeare. The structure of the two poems are different, Poem 1 is a sonnet. Although the two poems are about love, Poem 2 is about someone's first love while poem 1 might have been about someone's love when they were older. Another contrast is that Shakespeare only writes about how beautiful he thinks his loved one is while Clare writes more about how his love affects him, "And blood rushed to my face". I liked both poems but "First Love" impressed me most because the poem is about young people. Moi Dafydd 10 Tegid GCSE coursework 5th January, 2005 ...read more.