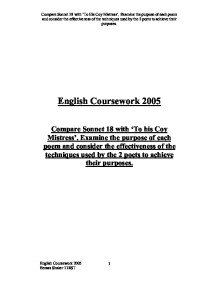 Compare Sonnet 18 with 'To his Coy Mistress'. Examine the purpose of each poem and consider the effectiveness of the techniques used by the 2 poets to achieve their purposes.

The style and tone of the two poems contrast. In the poem 'Shall I compare thee...?' Shakespeare uses a flattery tone making the style uplifting, full of praise and the tone gentle and calm. For example when he writes; 'But thy eternal Summer shall not fade'. Shakespeare compares her to a Summer's day, at the end of describing how beautiful Summer is, he writes that unlike Summer, her beauty will not fade, this is the turning point of the poem. In the poem 'To His Coy Mistress', the style and tone is quite aggressive, fearful and sinister. Marvell uses tactics throughout the poem to seduce the girl, such as fear tactics; 'But none I think do there embrace' making her feel as if she is old, and that she should not waste her virginity, also when she will grow, older he will grow uglier; this makes her feel under pressure to have sex with him now before she becomes older and uglier. Marvell also uses flattery techniques such as; 'My vegetable love should grow' and uses unsubtle persuasive techniques. He then defies time. I think that the poem 'To His Coy Mistress' has a more persuasive technique than Sonnet 18; this is because a fearful tone is more persuasive than a flattery tone in the poems. ...read more.

Lambic pentameter is also used in Sonnet 18 to make the Rhythm like most natural speech this makes the poem seem more genuine. Stressed words such as 'temperate' meaning reliable are stressed to add effect on the fact that they are reliable. There are unstressed words such as 'Shines' making the sentence calmer and softer to relate to what is being said. In the poem 'To his Coy Mistress' there are Rhyming couplets, but there are few syllable Patterns, for example the first four lines; line one has eight syllables; line two has seven syllables; line three has eight syllables and line four has seven syllables. The sound and Rhythm of the two poems contrast. Sonnet 18 sound and rhythm is slow, calm, and soothing, whilst THCM is speedy, aggressive and frantic. There is repetition used in Sonnet 18 in line two; 'Thou art more lovely and more temperate' , the repetition emphasises on how much better a Summer's day is. I think that Sonnet 18, has many persuasive techniques and tactics to add effect to the purpose of the poem, however I think that the poem 'To his Coy Mistress' has more techniques, tactics, themes, Imagery, Symbolism and better Structure, it was therefore easier to achieve it's purposes. ?? ?? ?? ?? Compare Sonnet 18 with 'To His Coy Mistress'. Examine the purpose of each poem and consider the effectiveness of the techniques used by the 2 poets to achieve their purposes. 1 English Coursework 2005 Eenass Shaker 11RST ...read more.