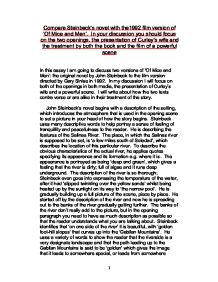 Compare Steinbeck's novel with the1992 film version of 'Of Mice and Men'. In your discussion you should focus on the two openings, the presentation of Curley's wife and the treatment by both the book and the film of a powerful scene.

Compare Steinbeck's novel with the1992 film version of 'Of Mice and Men'. In your discussion you should focus on the two openings, the presentation of Curley's wife and the treatment by both the book and the film of a powerful scene In this essay I am going to discuss two versions of 'Of Mice and Men': the original novel by John Steinbeck to the film version directed by Gary Sinise in 1992. In my discussion I will focus on both of the openings in both media, the presentation of Curley's wife and a powerful scene. I will write about how the two texts contra verse or are alike in their treatment of the story. John Steinbeck's novel begins with a description of the setting, which introduces the atmosphere that is used in the opening scene to set a picture in your head of how the story begins. Steinbeck uses many descriptive words to help portray a sense of feeling of tranquillity and peacefulness to the reader. He is describing the features of the Salinas River. The place, in which the Salinas river is supposed to be set, is 'a few miles south of Soledad', which describes the location of this particular river. To describe the obvious characteristics of the actual river, he applies quotes specifying its appearance and its formation e.g. where it is. The appearance is portrayed as being 'deep and green', which gives a feeling that the river is dirty; full of algae and it runs deep underground. The description of the river is so thorough; Steinbeck even goes into expressing the temperature of the water, after it had 'slipped twinkling over the yellow sands' whilst being heated up by the sunlight on its way to 'the narrow pool'. He is gradually building up a full picture of the scene, piece by piece. He started off by the description of the river and now he is spreading out to the banks of the river gradually getting further. ...read more.

a job, then they would not take it unless the other was offered a position as well. So they come as a package, George is the leader and looks after Lennie. Lennie appears to be a bit simple and George is a lot smarter. George appears first in Steinbeck's novel version. This is like a father to Lennie and so leads them both wherever they go. Lennie is exactly like a child, but bigger. I do not think that Lennie would be able to survive without George because he is irresponsible and relies on George. It is very dramatic because it shows who is in charge. George also appears first in Sinises' film version at the very beginning. This is because it relates to the flashback. He is started off inside a train and he is having a flashback of what he and Lennie had done back in 'Weed' and in their job after 'Weed'. I think that George could be thinking how he could right the wrongs that himself and Lennie had done in the past. It is very dramatic because he is thinking about when they used to be best friends and when they used to travel together and how George used be like a father to Lennie and tell him right from wrong. He is in shadow because it is nighttime and also, so that the audience would be uncertain and find it hard to see what was happening. Lights flashed across his face. This is effective because the lights would cast slightly on his face every few seconds, so this makes the viewers want to see who or what it actually is. It gradually builds up tension for the audience because of this. It is also effective because it shows that George may have two sides to himself. The audience is curious/intrigued as to who he is because they do not know who he is. ...read more.

Whilst Curley is on the table, Lennie's grip is so hard; Curley's hand starts to drip with dark, thick blood. By now, I would say that the audience is starting to feel a little shocked and rather frightened because they knew that Lennie was a strong individual, but now they know his true strength. George then rushes over to Lennie and tries to pull him away from Curley, but he can't, so George calls Slim to help and with both of them pulling, they eventually succeed. George drags Lennie over to his bunk and waits there until the others sort out Curley. Curley is on the table, partially stunned, and slim tells Curley that if he tells anyone about what happened, then they would do something bad to him. Slim also told him that he did! Get his hand caught in a machine and that he is not going to tell his father about what happened. In the book, all throughout the fight scene, they describe Curley and Lennie using animal imagery, for example 'Curley stepped over to Lennie like a Terrier', 'Lennie covered his face with his huge paws', 'Curley was flopping like a fish on a line'. This is effective because it shows the strength or what they give the impression of being like whilst they were fighting. From there on, in the film and the book, Curley had his whole arm in a sling. I think that this scene is very powerful because it shows that Lennie is not just big, slow, sensitive, and unintelligent and cannot fend for himself. In fact, when provoked, he can be hard to control, very strong and slightly emotional. To conclude, to get a good understanding of the story of 'Of Mice and Men', I would suggest that you both watch the film by Sinise - in order to get a good visual understanding and read the book by Steinbeck - in order to get a good descriptive understanding. By doing this it will give the viewer/reader a better perceptive of the characters and the story being told. 1 ...read more.