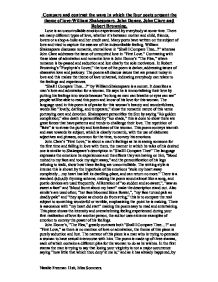 Compare the atitudes towards love in

Love is an uncontrollable emotion experienced by everybody at some time. There are many different types of love, whether it's between mother and child, friends, lovers or a shop-a-holic and her credit card. Many poets have written on the subject of love and tried to capture the essence of the indescribable feeling. William Shakespeare discusses romantic, eternal love in "Shall I Compare Thee...?" whereas John Clare addresses the issue of unrequited love in "First Love." Contrasting with these ideas of admiration and romantic love is John Donne's "The Flea," where romance is by-passed and seduction and lust clearly the sole motivators. In Robert Browning's "Porphyria's Lover," the tone of the poem is darker, addressing issues of obsessive love and jealousy. The poems all discuss issues that are present today in love and this makes the theme of love universal, indicating everybody can relate to the feelings and experiences. "Shall I Compare Thee...?" by William Shakespeare is a sonnet. It describes a man's love and admiration for a woman. He says he is immortalizing their love by putting his feelings into words because "so long as men can breathe or eyes can see" people will be able to read this poem and know of his love for this woman. ...read more.

John Donne's, "The Flea," greatly contrasts both "Shall I Compare Thee...?" and "First Love," as there is no mention of love or admiration, the theme of this piece is purely seduction and lust. The narrator of this piece is a man who is trying to persuade a woman to have sexual intercourse with him. The poem is made up of three stanzas, each of which contains a different plea for the woman to do as he wishes. In the first stanza the man is trying to say that losing your virginity is not a major occurrence saying "how little that which thou deny'st me is," and as it has already happened, by the flea biting them both-allowing their bloods to mingle-they may as well do it properly (it was commonly thought in the 16th century that when you had sex your bloods mixed). In the second stanza the man changes tactics, talking of religion and marriage, using arguments such as "this flea is you and I, and this our marriage bed, and marriage temple is." In the third stanza the woman has killed the flea and the man is trying to make her feel guilty about killing the innocent flea and saying if they had sex it would make it alright "cruel and sudden....purpled thy nail in blood of innocence." ...read more.

As the lover realises Porphyria does love him he becomes "happy and proud" the repetition of "mine," clearly portrays possessiveness. As he decides to kill her and actual does so the tone of the poem does not change, he states the event of murder without regret of feeling "...and strangled her," the lover is in control of his emotions, although he thinking irrationally; "no pain felt she, I am quite sure she felt no pain." This indicates a strong possibility that the lover is insane. Browning uses fallacy for the weather, "the wind... tore the elm-tops...and did its worst to vex the lake." This piece is an excellent representation of obsessive love, the lovers mind is occupied purely with the thought of making her his own and no one else's he believes Porphyria is an object rather than a person so he has no problem killing her to eternalize their love. The four pieces show very different aspects of love and despite having major differences two have some similarities, with "First Love," and "Shall I Compare Thee...?" both clearly express admiration and wonder. "Porphyria's Lover" and "The Flea," are not similar to the other poems or each other they do not speak of love kindly if at all. Compare and contrast the ways in which the four poets present the theme of love-William Shakespeare, John Donne, John Clare and Robert Browning. Natalie Freeman 11sii, Miss Sommers. ...read more.