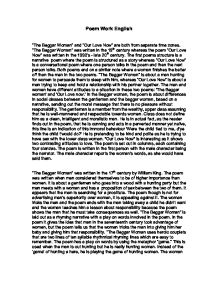 Poem Work English "The Beggar Woman" and "Our Love Now" are both from separate time zones. "The Beggar Woman" was written in the 19th century whereas the poem "Our Love Now" was written in the 1990's - late 20th century. The first poems structure is a narrative poem where the poem is structured as a story whereas "Our Love Now" is a conversational poem where one person talks in the poem and then the next person talks. Both poems end on a similar note where a woman finishes the better off than the men in the two poems. "The Beggar Woman" is about a man hunting for women to persuade them to sleep with him, whereas "Our Love Now" is about a man trying to keep and hold a relationship with his partner together. The men and women have different attitudes to a situation in these two poems: 'The Beggar woman' and 'Our Love now.' In the Beggar woman, the poem is about differences in social classes between the gentleman and the beggar woman, based on a narrative, sending out the moral message that there is no pleasure without responsibility. The gentleman is a member from the wealthy, upper class assuming that he is well-mannered and respectable towards women. Class does not define him as a clean, intelligent and moralistic man. He is in actual fact, as the reader finds out in the poem, that he is cunning and acts in a perverted manner yet na�ve, this line is an indication of this immoral behaviour 'Were the child tied to me, d'ye think the child t'would do?' ...read more.

He had to carry his cross as a burden to the top of a hill where he was killed. In the poem the baby is used as a metaphor so as the baby is the burden and has to be carried on the mans back. "The beggar woman" to conclude is a witty poem in the form of a morality tale. The poem reverses the roles in terms of power, leaving the carefree Lord to look after the baby whilst the peasant woman leaves with her freedom. The poem uses puns and dialogue to express the tricking of the hunting Lord. "Our Love Now" was written in the 19th century by Martyn Lowery. The poem is set up in stanzas of free verse, a man talking in one verse then the women in the next verse. The poem is a man trying to keep a relationship together by trying to prove to his partner that he still loves her and their relationship is still alive. The woman is responding by being very negative and telling her partner that the relationship is over and is contradicting everything that the man is saying. For example the man says how their relationship was a storm but the storm has passed and it is clear ahead for them both. The woman responds by saying that he is true but a storm always leaves lasting damage behind that cannot be repaired. ...read more.