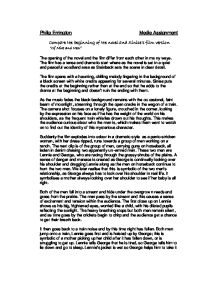 Philip Errington Media Assignment Compare the beginning of the novel and Sinise's film version "Of Mice and Men" The opening of the novel and the film differ from each other in many ways. The film has a tense and dramatic start where as the novel is set in a quiet and peaceful woodland area as Steinbeck sets the scene in clear detail. The film opens with a haunting, chilling melody lingering in the background of a black screen with white credits appearing for several minutes. Sinise puts the credits at the beginning rather than at the end so that he adds to the drama at the beginning and doesn't ruin the ending with them. As the music fades the black background remains with the occasional, faint beam of moonlight, streaming through the open cracks in the wagon of a train. The camera shot focuses on a lonely figure, crouched in the corner, looking by the expression on his face as if he has the weight of the world on his shoulders, as the frequent train whistles drown out his thoughts. This makes the audience curious about who the man is, which makes them want to watch on to find out the identity of this mysterious character. ...read more.

The camera focuses on them for several seconds to emphasise this aspect of their relationship and to show how close the two men are. In the novel the two men are not in the water when they cuddle and there is no indication that George is bigger than Lennie. They are both on the banks near to the water. Sinise just adds this part in to the film to make it look as if Lennie has just fallen over emphasising his helplessness. In the novel Lennie asks George to tell him the story of 'how it is gonna be', and after several attempts George shoots him in the head and helps him die painlessly and with a certain amount of dignity. At the sound of the shot the men appear and surround George. They think there has been a struggle and George has shot Lennie in self-defence, only Slim realises what has really happened. Although George is left all alone there is the possibility that Slim and he will develop a closer friendship. Many changes were made from this original ending in the film version. When George was telling Lennie the story of 'how it was gonna be' he shoots him first time after Lennie says "and I get to tend the rabbits". ...read more.

This results in her need to lust for the other men on the ranch, as this may be her only chance to find the happiness she secretly yearns for. This tone that she speaks to people in is exempt from many parts of the film as the director tries to make the audience feel sorry for her, whilst in the novel you are made to think that she deserved to be killed due to the way she threatened Crooks. I feel Sinise did this to make you feel sorry for her when she dies and to bring George's killing of Lennie into a deeper prospective. The age of Curley's wife also differs in both the novel and the film. In the novel Curley's wife is merely the tender age of fifteen/sixteen, whilst in the film she is portrayed as a much older and more mature age. My personal favourite between the novel and the film, is the novel as it is an epic and thrilling read. I think that the film version is very emotional, and the director Sinise portrays the novel in a different way, although the detail and description of the film can never compare with the original novel. You will find that in most cases the film cannot reproduce the same empathy and imagination used when the author first creates their masterpiece. ...read more.