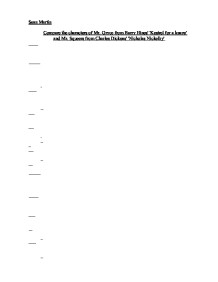 Compare the characters of Mr. Grycefrom Barry Hines''Kestrel for a knave' and Mr. Squeers from Charles Dickens' 'Nicholas Nickelby'.

Sean Martin Compare the characters of Mr. Gryce from Barry Hines' 'Kestrel for a knave' and Mr. Squeers from Charles Dickens' 'Nicholas Nickelby' During the course of this essay I will be comparing the teaching methods, school conditions and general demeanor of Mr. Gryce, a secondary school headmaster in the 1960's, and Mr. Squeers who controls a boarding school for disabled and unfortunate children in the 1830's. Both schools are set in Yorkshire. Mr. Gryce is an experienced teacher with 35 years in his profession, although he is seen as a well experienced teacher he is also at or past the suggested retirement age, and some would consider him unfit for the demanding job. In all schools throughout the world the main point in attending is to receive an education, but Mr. Gryces' is different. The reason for going to his school is to learn four things, 'Discipline, decency, morals and manners.' On the other hand, Mr. Squeers had no teaching experience before he started running his boarding school. The only reasons he started teaching were for the money and secondly the power that he could be sure of gaining even if he and his wife had to steal for it. ...read more.

Like Mr. Gryce he too has no respect for the pupils and also shows no intentions of listening to them. His love of money is sometimes inhuman, 'The worthy lad pocketed the eighteen pence with a most business like air.' The eighteen pence was a child's pocket money, which he ordered his wife to take. Not only is he a thief, but also he has no respect for any human, dead or alive. 'Oh said Squeers, Cobbey's grandmother is dead, and his uncle John has took to drinking.' Any human with a slight sense of respect would have at least tried to show some sympathy towards the boy, but with Squeers basic need for money and power this does not fit into his life. Squeers' 'practical mode of teaching' is laughable, we are told that his teaching experience is little, but if he is to build up a decent reputation then he should at least be able to spell window, 'W I N win D E R winder.' After he has taught the boys to spell a word incorrectly, he then makes his case for being a bad teacher go from bad to worse, he makes a pupils clean a window, once again saving him money and giving him power over that pupil. ...read more.

the government became aware of it to. Soon after the tripartite system changed to the comprehensive system of today. The comprehensive system is there to give all pupils equal opportunities; Barry Hines was trying to say that a person's life should not depend on the result of an exam taken at the age of eleven. Barry Hines succeeded. Charles Dickens, the author of 'Nicholas Nickelby' wanted a complete reform on education. He knew what a shambles it was. With his newspaper articles which the book started of as, he raised awareness to many people, more often than not educated people, that the system was badly run and that people like Mr. Squeers and places like Dotheboys Hall do actually exist. He was believed to have based the story on a newspaper article he had read were the guilty man was trailed from similar circumstances to Mr. Squeers. Many years after Mr. Dickens brought this major fault to peoples attention others started pointing it out to, and on the year of his death, his aim was achieved. In 1870 the Education Reform Act was put into place to stop criminals like Squeers from being in the education system. Charles Dickens also achieved his aim. ...read more.