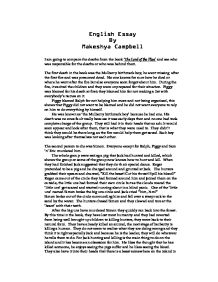 Compare the deaths from the book 'The Lord of the Flies' and see who was responsible for the deaths or who was behind them.

English Essay By Makeshya Campbell I am going to compare the deaths from the book 'The Lord of the Flies' and see who was responsible for the deaths or who was behind them. The first death in the book was the Mulberry birthmark boy; he went missing after the first fire and was presumed dead. No one knows for sure how he died or where he went after the fire but also everyone soon forgot about him. During the fire, it excited the children and they were unprepared for their situation. Piggy was blamed for his death at first; they blamed him for not making a list with everybody's names on it. Piggy blamed Ralph for not helping him more and not being organised, this shows that Piggy did not want to be blamed and he did not want everyone to rely on him to do everything by himself. He was known as 'the Mulberry birthmark boy' because he had one. His death was no ones fault really because it was early days then and no one had took complete charge of the group. They still had it in their heads that an adult would soon appear and look after them, that is what they were used to. They didn't think they would be there long, as the fire would help them get saved. Each boy was looking after themselves not each other. ...read more.

Ralph won't admit to being scared about Simons' death or to being scared about what Jack might do next. He convinces himself and Piggy that what happened was an accident. The third and final person to die was Piggy the most levelheaded one of them all. Jack's Tribe committed the murder, this shows that Jack and his tribe are only interested in hunting and killing at this stage and they do not care who they kill. They kill when they get carried away in their dancing rituals and the unlucky victim is the person who happens to be in their way at the time. Jack's tribe has painted their faces and stole Piggy's glasses, they painted their faces so they camouflaged into the bushes and trees so they could hunt pigs easier, Without his glasses Piggy can't see or start a fire. Ralph and Piggy go to Jack and Ralph demands that he give back Piggy's glasses. Jack laughs but Ralph tells him that he voted for him to be leader so he should listen to his rules and demands. Both Jack and Ralph challenge one another but neither goes any further than that. Piggy gets hold of the conch, but the group refuses to listen to him. Jack ties Piggy and Ralph up and then Roger starts to throw stones at Ralph and Piggy. ...read more.

No one complained because it was food but no one said anything when he and his tribe killed another person. At this point Jack had the overall power and killing was part of his nature. The children only started hunting and killing when they got tired of having nothing to do all day, they needed entertainment and this is where the beast could have come from. They usually went hunting in search of the beast to kill it but they never found it. This is because the beats only existed in their thoughts. They thought the beast was a danger to them but they were a danger to themselves. The deaths were not accidents the boys knew what they were doing; they never regretted what they did. If the deaths were an accident then how come there was three? Once can be deemed as an accident, twice more after that can only be classed as deliberate. Some of them never really knew what they were doing and if they did they didn't have the courage to try and put a stop to it, this is why the murders can be classed as accidental. Even if they hadn't wanted to kill anyone they wouldn't have been able to stop themselves plus some of them had no choice they had to do what the leader commanded or they faced death themselves. ...read more.