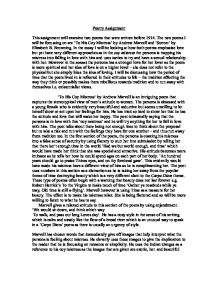 Compare the different approaches to love in 'To His Coy Mistress' by Andrew Marvell and 'Sonnet' by Elizabeth B. Browning.

Poetry Assignment This assignment will examine two poems that were written before 1914. The two poems I will be focussing on are 'To His Coy Mistress' by Andrew Marvell and 'Sonnet' by Elizabeth B. Browning. In the essay I will be looking at how both poems emphasise love but yet have very different approaches as in the coy mistress the persona is trapping his mistress into falling in love with him and uses tactics to try and have a sexual relationship with her. However in the sonnet the persona has a stronger love for her lover as the poem is more spiritual and her idea of love is on a higher level - she does not refer to the physical but she simply likes the idea of loving. I will be discussing how the period of time that the poets lived in is reflected in their attitudes to life - the tradition affecting the way they think or possibly makes them rebellious towards tradition and to run away with themselves i.e. existentialist views. 'To His Coy Mistress' by Andrew Marvell is an intriguing poem that captures the stereotypical view of men's attitude to women. The persona is obsessed with a young female who is evidently very beautiful and seductive but seems unwilling to let herself show or act upon her feelings for him. He has tried so hard to show her that he has the attitude and love that will make her happy. The poet is basically saying that the persona is in love with this 'coy mistress' and he will try anything for her to fall in love with him. The poet talks about there being not enough time to think about the proposal but to take a risk and run with the feelings they have for one another - and thus run away from tradition too. In the first section of the poem, the persona is coaxing his mistress into a false sense of security by using flattery to stun her ...read more.

The strength of her writing makes the reader query her heart-felt need of love also. Even though the Sonnet is written as 14 lines, the strength is used in her words. They are affective and give images that are relevant to how she is feeling. 'I love thee with the passion put to use' The style induces ecstasy. It seems like she cannot stop herself and everything that she considers is appropriate to her love so inevitably the ideas are overflowing. However it seems that she cannot find the right idea of how to express what she is feeling as there are so many ideas but all lead to the opium which is her love. The persona is so narrow-minded in the sense that 'love' is nothing compared to anything else and all she does and thinks about is love. The images that are given off from the writer are na�ve as she seems to have a solid stand in what she believes and the images prove to be a little forward or strong for the concept of the poem. Her reference to religion is so strong and her ideas are so harmonic and peaceful. She refers to the 'Grace, candle-light, saints and God' which all give off such a strong religious aspect of her life whether she was religious or not. The ' candle-light' which is a mere reference to white light which could indicate the sense of innocence and purity is a strong image that allows the reader to reflect on her love. Her constant reference to God gives the implication that she is so conscious with her love and if God wishes to take her away 'death' then she will never stop loving him. Possibly she is so aware that God is all around and that he could be interference to their love. Elizabeth B.Browning was 40 when she wrote the poem and maybe her naivety is a significant way of expressing that she is needed to be loved therefore The writers tone to the poem is so energetic and exhausting to the reader. ...read more.

Yet Marvell gives a stronger argument for his love as Browning is more poignant. It comes across that Browning is quite na�ve and her ways of dealing with love are so impetuous as she becomes so carried away with the fact that she is in love. After studying both poems in depth, I prefer To His Coy Mistress to Sonnet for several reasons. Both poems are passionate however To His Coy Mistress has a broader appeal. It deals with the first stages of love and he uses wit and irony which makes it entertaining. However much he may be infatuated by this woman, he retains certain objectivity. Yet still there are dark undertones but a final powerful, optimistic message. It is because of this variety of tone that I prefer it. He takes us on a journey of surprises. Sure it's extreme but isn't that what sets the spirit soaring and gets the adrenaline pumping through the veins? The Sonnet contains no surprises. It does convey passion but in such a way that the reader is exhausted by the end of the poem by its intensity. Marvell is clearly in control - of himself and of the reader, Browning is at the mercy of her emotions. The Coy Mistress is undoubtedly an amazing poem and it seems like whatever you think or feel you can still agree with his way of thinking and his constructive way of using wit, amusement and passion shows how strong he felt about his mistress. However the Sonnet also is a very endearing poem that entraps you into reading and makes you feel quite optimistic about life and it is something that you read and then afterwards you think 'wow'. The strength of feeling is so passionate and the way she gets herself into a state of ecstasy is amazing to think that someone could really become bewildered by the power of love and it makes you think that it could possibly happen to you one day. ...read more.