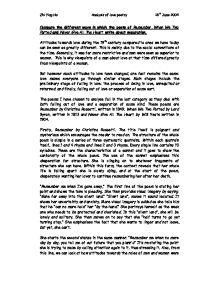 Compare the different ways in which the poets of Remember, When We Two Parted and Never Give All The Heart write about separation. Attitudes towards love during the 19th century compared to ones

Compare the different ways in which the poets of Remember, When We Two Parted and Never Give All The Heart write about separation. Attitudes towards love during the 19th century compared to ones we have today can be seen as greatly different. This is mainly due to the social conventions of the time. Generally, it was far more restrictive and men were seen as superior to women. This is why viewpoints of a man about love at that time differed greatly from viewpoints of a woman. But however much attitudes to love have changed, one fact remains the same: love makes everyone go through similar stages. Main stages include the preliminary stage of falling in love; the process of being in love, unrequited or returned; and finally, falling out of love or separation of some sort. The poems I have chosen to analyse fall in the last category as they deal with both falling out of love and a separation of some kind. These poems are Remember by Christina Rossetti, written in 1849; When We Two Parted by Lord Byron, written in 1813 and Never Give All The Heart by W.B Yeats written in 1904. Firstly, Remember by Christina Rossetti. The title itself is poignant and mysterious which encourages the reader to read on. The structure of the whole poem is simple in a series of three systematic quatrains. Within each quatrain itself, lines 1 and 4 rhyme and lines 2 and 3 rhyme. Every single line contains 10 syllables. These are the characteristics of a sonnet and it goes to show the conformity of the whole poem. The use of the sonnet emphasises this desperation for structure. She is clinging on to whatever fragments of structure she can have. Within this form, the context reveals that her whole life is falling apart: she is slowly dying, and at the start of the poem, desperately wanting her lover to continue remembering her after her death. ...read more.

The fact that this lady being spoken about in When We Two Parted made a decision to run off with this man makes her totally unconventional and therefore, people of the time ostracized her. At this point, whatever she has of a reputation is in tatters. He says that whenever her name is spoken of, he does "share in its shame". He doesn't show any defense for her at all. This sounds cruel to the reader as if he did once have feelings for her, then she should be dear enough for him to stand up and defend her. Instead, because she has run off with another man, he bows with shame at the knowledge that he had anything to do with her. This goes further to show that in the 19th century, to run off with another man was almost unheard of and greatly immoral. What comes next is a further look into his viewpoint on what is going on after her departure. Her name, whenever spoken is like a 'death bell' to his ears. There is an extremely strong contrast to the clich�d phrase of love: 'her name was like music to my ears.' Clearly, the poet isn't trying to give an impression of sorrow at her departure. The effect is so great that he "shudders" at the thought that she "wert so dear." He places this as a question (Why wert thou so dear?) which depicts a sense of regret that he even had a relationship with her. Again, the fact that their affair was a secret and forbidden one is shown once more in the next stanza as he states "They know not I knew thee, Who knew thee too well." The use of "they" here groups the rest of the people against him and her. He also says that he knew her "too well". Similar to the previous stanza, a note of regret can be found in this line. ...read more.

He's telling people that he once gave all his heart, and got hurt in the process. He provides the reader with a concrete example, the aim being that the reader will be more inclined to believe it. The tones of the poems give accurate depictions of the poets' emotions which might be masked by the way they express themselves as it is in the case of When we two parted. As with other aspects, the tone of When we two parted is similar to that of Never give all the heart. They are both bitter ones, disappointed over the fact that they have failed to fully capture the hearts women they loved. There is however, different 'shades' of tones to When we two parted, On one level, it seems indignant that she is willing to sacrifice her reputation for her lover and not the poet, on another, it seems disappointed at the fact that she let go of her love for him. And the impression of the standoffish-ness he tries to create in the first stanzas is formed by the use of a cold and remote tone. Remember's tone is desperate in the first few stanzas and later on calm as she finally gets to a point where she understands the whole scenario and what she must do. It doesn't bear any resemblance to the tones of When We Two Parted and Never Give All the Heart. All three poems deal with unwilling separation. In Remember, the woman is being dragged from life into death, in When We Two Parted, the guy watches his ex-lover fall in love and run off with another man, which she wouldn't do for him, and in the last, Never give all the heart, he suffers as she repeatedly rejects him, and married another man later on. While When We Two Parted and Never Give All the Heart have parallels, Remember is different from both of them. ?? ?? ?? ?? Zhi Ying Ho Analysis of love poetry 18th June 2004 ...read more.