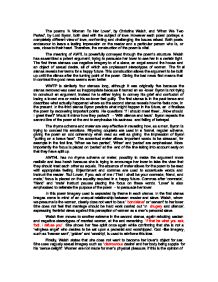 Compare the differing views on love from the poems 'A Woman To Her Lover', by Christina Walsh, and 'When We Two Parted', by Lord Byron

The poems 'A Woman To Her Lover', by Christina Walsh, and 'When We Two Parted', by Lord Byron, both deal with the subject of love. However each poem portrays a completely different view of love, confronting and challenging the issues raised. Both poets endeavour to leave a lasting impression on the reader and a particular person who is, or was, close to their heart. Therefore, the construction of the poem is vital. The meaning of AWTL is powerfully conveyed through the poem's structure. Walsh has assembled a potent argument, trying to persuade her lover to see her in a certain light. The first three stansas use negative imagery to of a slave, an angel around the house and an object of sexual desire, all of which are unpleasant stereotypes of women. The final stansa reveals her terms for a happy future. This construction allows the argument to be built up until the climax after the turning point of the poem. Giving the bad news first means that in contrast the good news seems even better. WWTP is similarly four stansas long, although it was originally five because the stansa removed was seen as inappropriate because it named an ex-lover. Byron is not trying to construct an argument, instead he is either trying to convey his grief and confusion of losing a loved one or make his ex-lover feel guilty. ...read more.

Walsh, whom we presume is the woman, clearly does not want to be a 'bondslave' or 'servant' to her lover. She does not feel that marriage should be hard work carried out 'In drugery and silence', expressing feminist views against this perception of women as a man's personal slave. Walsh then moves to another extreme in the second stansa, again rebuking sexism and negative stereotypes of married women, at the end remarking 'If that be what you ask, fool, I refuse you'. She shows her free spirit once again while confirming that she is not a 'wingless angel' who desires to be sat upon a pedestal and worshipped. God-like imagery, such as 'heaven sent', 'golden' and 'worship', is used to reinforce this idea. Finally, Walsh states that she does not want to become her lover's object for sex. She uses vaguely sexual imagery such as 'clamourous desire' and her body being supple for his 'sense delight'. Women are not made for men's physical pleasure; if this is the opinion of her lover he will never become her husband and deserves no woman - 'Not for you the hand of any wakened woman of our time' The imagery of the final stansa is in the same semantic field. It portrays equality through comradeship, living and working, loving and dying together. ...read more.

I think WWTP is an effective poem. While reading it I certainly pitied Byron in having to suffer alone. It must be difficult to regret what happened and yet feel so upset that he believes that if they meet again, it might be in the same way that they parted. This poem could be seen by some as a comfort, that other people have done and do suffer in similar ways. Knowing Byron's "Bohemian" lifestyle, and how he presumably recuperated from his loss, there is a light at the end of the tunnel. I find Byron's account of love depressing, as it suggests no love is forever and one has to get over loss. Therefore, I prefer AWTHL. I like the imagery Walsh used and its importance to the construction of her argument. I was impressed that a woman of that period was standing up for her views and stating what she wanted from life and her man. She expresses these views effectively in her responses to the stereotypes of the first three stansas. Dealing with the subject of love in a positive light and asking for equality to ensure a happy marriage makes her argument appear extremely reasonable. I like the way that the meter in WWTP allows the poem to be read easily, but overall I find Walsh's poem is much more encouraging and necessary as it can give men an insight into how women feel! Meter - metre Stansa - stanza ...read more.