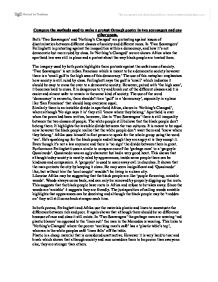 Compare the methods used to make a protest through poetry in two scavengers and one other poem.

Compare the methods used to make a protest through poetry in two scavengers and one other poem. Both 'Two Scavengers' and 'Nothing's Changed' are protesting against issues of discrimination between different classes of society and different races. In 'Two Scavengers' Ferlinghetti is protesting against the inequalities within a democracy, and how it's not democratic but more ruled by class. In 'Nothing's Changed' we are shown Africa when the apartheid law was still in place and a protest about the way black people are treated there. The imagery used by both poets highlights there protests against the unfairness of society. 'Two Scavengers' is set in San Francisco which is meant to be a democratic society however there is a 'small gulf in the high seas of this democracy.' The use of this metaphor emphasizes how society is still ruled by class. Ferlinghetti says the gulf is 'small' which indicates it should be easy to cross the over to a democratic society. However, paired with 'the high seas', it becomes hard to cross. It is dangerous to try and break out of the different classes and it is easier and almost safer to remain in the same kind of society. ...read more.

Since the weeds are 'amiable' it suggests they are friendly. The juxtaposition of calling weeds amiable highlights that appearances can be deceiving and although the black people may be 'trodden on' they will still come back stronger each time. In both poems, Ferlinghetti and Afrika use the materials plastic and linen to accentuate the difference between rich and poor. It again shows that although there should be no difference because of race and class it still exists. In 'Two Scavengers' the garbage men are wearing 'red plastic blazers' as opposed to the 'linen suit' the man in the Mercedes is wearing. This links to 'Nothing's Changed' where the poorer 'working man's caf�' has a 'plastic table's top', whereas in the white peoples caf� 'linen falls' off the table. Plastic is a cheap material that is considered unattractive. However it is very hard to tear and break which shows that although society and race considers them to be poorer than everyone else, they are stronger than others. Linen is more associated with richer, well off people. It is malleable and can be shaped into almost anything. This suggests that the richer, higher people in society do what they can to fit in. ...read more.

Also in the middle of the poem there is the two line stanza, 'No sign says it is: but we know where we belong.' It is almost separate from the rest of the poem which draws the readers attention to it. It could be that this is Afrika's main point of the poem so he deliberately draws our attention to it. Both poems show the injustice in the society they live in, and how although the divide was abolished it is still there, invisible but prominent. In 'Two Scavengers' the only thing separating the 'cool couple' from the 'garbage men' is the jobs they do. Both the man in the Mercedes and the young garbageman wear 'sunglasses', are 'about the same age' and have 'long', 'shoulder-length' hair. They are both similar yet because of social class the garbage man is considered ugly. This makes us consider the fact that they aren't interchangeable. One of them has money and the other doesn't and although that is only a little detail, in a society ruled by class is become a big one. In 'Nothing's Changed' the 'amiable weeds' are being outgrown by the 'Port Jackson trees'. They are both plants yet because the tree's are better looking, and considered less troublesome they become better than the weeds, indicating the white people are better than the black people. ...read more.

The answer has answered the set question is a comphrensive and detailed manner, managing to explicitly detail and develop everything and link most points back to the question and the protest being presented by the poets. The originality and personal ...

The answer has answered the set question is a comphrensive and detailed manner, managing to explicitly detail and develop everything and link most points back to the question and the protest being presented by the poets. The originality and personal ideas in the essay are very good, just taking the chosen points a bit further without straying too far and stretching impossible links.

Each point made is detailed, but not particularly specific. While this is a good thing because it means each point can be linked with various quotes and techniques to back it up with further evidence, the candidate has not really done this; they quote from the poem and follow this with a paragraph or so of analysis and although this level of detail and development is good, the usage more quotes in each point or making more points with less detail would maximise the marks recieved. The introduction is good, setting out the attitudes of each poet as a starting point to refer back to, but the student could do with putting the poems into context a bit more, and just writing a short sentence on what occurs in the poem and why they think it is a protest.

Although general spelling and grammar are satisfactory, there are a few mistakes which would be obvious to the examiner and probably result in lower marks, such as 'there' instead of 'their'. It is also a good idea in exams to try and use reasonably sophisticated vocabulary, and avoid more colloquial terms such as 'well off'. An increase in the use of terminology would also help, proving to the examiner they can identify these devices and giving them easy points of comparison, but the general layout of the answer covers the all of areas the question asks.